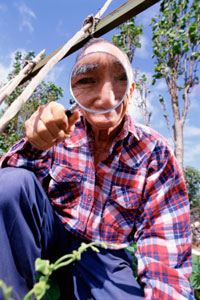 Anthropologists spend a lot of time getting up close and personal with their subjects -- other people and cultures.
Comstock/©Getty Images/Thinkstock

Of all the organisms roaming Earth, one of the most fascinating creatures happens to be, well, us. Perhaps it's because we human beings are a narcissistic bunch, but we do expend a lot of energy on anthropology, which is the study of human cultures and peoples.

All kidding aside, anthropology is perhaps one the most important academic pursuits humans undertake. That's because with anthropology, we not only gain a better understanding of where we came from, but we also develop a clearer picture of exactly what human nature is all about -- and maybe even gain insight into the future of our species.

Anthropology is a far-reaching field that bridges a lot of academic disciplines. But suffice it to say that anthropologists (also sometimes called social scientists) don't spend all of their time poring over dusty history books in a dark corner of a university library. Rather, anthropologists are among the most adventurous of researchers. They may travel all over the globe in search of answers to the toughest anthropological puzzles.

Anthropology's ultimate aim, simply, is to comprehend human nature in all of its intricacy and diversity. Additionally, anthropologists explain the inner workings of really big social problems, such as disease epidemics, overpopulation and poverty.

For example, anthropologists specializing in medical anthropology might research maternal mortality in Africa. By highlighting factors such as a lack of health care, poverty, a shortage of health workers, religious beliefs and educational shortfalls, these researchers build a picture of maternal mortality and its causes. With that understanding, they can propose solutions that may improve the lives of a lot of mothers and their families.

Anthropologists work in nearly every segment of both the for-profit and non-profit marketplace. Both sectors need employees who can analyze and understand other people, either to increase revenue or to come up with theories and practical means for resolving pressing social problems.

Whatever the specific end goal might be, anthropology is special in its long-term, cross-cultural perspective. It truly sets out to compare and study all aspects of the human experience. As you'll see next, it took us humans a while even to conceive of this kind of reflective analysis. 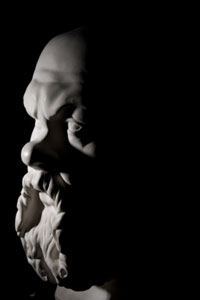 Socrates and Plato helped to change the way people think about their lives and place in the world, giving rise to the kind of critical analysis that anthropology requires.
Hemera/Thinkstock

In 2005, Hurricane Katrina wrecked many parts of the Gulf Coast region, leaving many people to wonder why the disaster happened and why America struggled to help its people. In the aftermath, anthropologists evaluated governmental responses to the storm, developed plans for resettlement, and studied how catastrophes like this impact both individuals and groups. In the end, the knowledge these scientists gained may help people the next time calamity strikes.

Anthropology has been around for literally hundreds of years. The term first found its way into the English language around 1600. But Western-style anthropology has existed since before the advent of Christianity. Ancient Greeks and Romans created powerful intellectual styles of thought that greatly influenced humanity's perspective on its place in the world.

Socrates and Plato, for example, taught critical thinking skills and philosophy. They also had a vital influence on how people perceive themselves and their place in the world -- the kind of creative thinking that anthropologists (among many other types of thinkers) use constantly in their work. Around 1500, the development of philosophy began to rapidly accelerate, thanks to people like Rene Descartes, Voltaire, Immanuel Kant and many more, Suddenly, people everywhere were rethinking their perceptions of themselves and their world.

For a long time, a lot of anthropological thinking relied on speculation. But as anthropology evolved, it moved from "armchair anthropology," which relied heavily on academic, office-bound study and hypothetical scenario-building, into an interactive type of research in which scientists immerse themselves in the environment they are studying. In a minute, you'll see just how fully anthropologists plunge into their work.

For the moment, it's important to understand that in the United States, anthropology is divided into four different subfields: biological anthropology, archaeology, linguistic anthropology, and social/cultural anthropology. Other countries, such as those in Europe, consider these subfields too distinct to lump together and instead treat each subject as its own field of study. But the so-called "four-field" approach in the United States is used by many universities to structure curriculum and guide students in their education.

Regardless of his or her specialty, an anthropologist has a lot of potential places to find work. In fact, you'll find anthropologists in places you may never have expected them to wander.

Anthropology often requires its students to fan out and scour the globe for answers to their questions. Enterprising anthropologists can find work in many diverse business environments. Corporations that trade globally need people who understand other cultures and can help develop relationships with societies that may be very different from their own. For example, a pharmaceuticals company might want an expert on infant feeding routines or perhaps nutrition information specific to certain cultures.

Non-profit and public job markets also seek those with anthropological backgrounds. A medical center might be researching women's health issues and need expertise on the cultural acceptance of prenatal testing and family planning.

Yet no matter how well-meaning their research might be, anthropologists sometimes attract controversy. And one of the most contentious subjects regards the Yanomami Indians of the Amazon rainforest. Anthropologist Napoleon Chagnon visited this region in the 1960s to study these primitive people, and his writings and films turned the Yanomami into worldwide celebrities. Around the globe, people clamored for more information about the fascinating tribes, while others started fundraising campaigns to "save" the Indians from their low-tech jungle lives.

Then things became even more chaotic. A journalist and native-rights activist named Patrick Tierney accused Chagnon of manipulating his findings to misrepresent the Yanomami. Tierney wrote, for example, that Chagnon made the Indians out to be a violent people who spent a lot of time fighting amongst each other, in part by purposely staging conflicts for video cameras to record. Tierney also blamed geneticist James Neel for unleashing a measles vaccine on the Yanomami that killed hundreds or thousands of people.

Tierney's findings were supported by many people he interviewed but denied vehemently by others. Concrete proof of Yanomami exploitation and the epidemic hasn't been established. But this kind of situation shows the disturbances that can occur when scientists plunge headlong into another society -- with their newfound fame, the Indians were forever changed.

As you'll read next, beyond the safe confines of their offices, anthropologists actively engage very different types of people, often in tense or even dangerous situations.

Paul Farmer is a doctor and anthropologist who helped found Partners in Health, a non-profit health organization that works towards bettering the lives of poverty- and disease-stricken people around the world. Farmer has spent years of his life in very poor countries, such as Haiti, making health care more available to the poor and suffering. And because he's a doctor himself, Farmer often diagnoses and treats the people he meets. 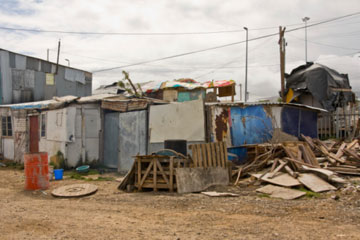 Anthropologists often interact directly with the people they are studying, trying to come to terms with complex subjects like poverty and violence.
©iStockphoto/Thinkstock

Anthropologists often pursue education as a career track, sharing their knowledge with university students. Many of those students may study anthropology in hopes of landing exciting fieldwork, perhaps in some mysterious, far-flung location. And for these audacious souls, there is plenty of adventure to be had. For instance, they often work in disaster areas, helping organizations handle refugee crises, or take on humanitarian problems in the aftermath of catastrophes, such as Hurricane Katrina and the 9/11 terror attacks.

Anthropologists may even take up residence in a new country so as to become fully engrossed in an unfamiliar culture. Doing so lets them readily observe and interact with locals and develop any necessary language skills.

Embedded in this kind of intimate, close-proximity research, anthropologists may encounter intense situations. Disease control organizations need social scientists to help understand certain populations, perhaps an ethnic subset in a large urban area that's suffering from an outbreak of a virus such as HIV. An anthropologist might explore the city, interact with sick and frightened people, and try to help halt the virus's spread.

Military units often employ anthropologists to help commanders develop a better understanding of an occupied land. In the United States Army, anthropologists interview local citizens to gauge their attitudes toward invading forces and to forge ties with local leaders, all in an attempt to increase safety and security for both citizens and soldiers. Work like this is dangerous and anthropologists sometimes put their lives at risk. However, the pay is much higher than with cushier gigs.

War zones aren't the only places anthropologists might encounter life-threatening dangers. Cities with gang violence problems send social scientists to interview and investigate the issues contributing to gang formation and violence. They might spend a lot of time directly in harm's way attempting to help citizens with conflict resolution and communication-development skills.

These scientists may trade in harrowing adventure for safer jobs in a corporate or academic setting. Successful anthropologists who work as private consultants can build their resumes to fit specific interests, and they have the flexibility to change career paths. For example, they may dedicate much of their time to working on family planning challenges in poorer countries, and then return to their country of origin to tackle the same kinds of problems.

As academics and professionals, anthropologists are a lot like the human race itself -- full of diversity and mystery, curiosity and wonder. Anthropology is truly a human endeavor that seeks deeper truths and knowledge about what humans really are, and one that may help us guide our species' long-term survival.

Green or Blue? The Best Turquoise Is More Valuable Than Diamonds
Antarctic Ice Shelf Melting From the Inside Out, Which Is Not a Good Thing
What if the Chicxulub meteor Had Missed the Earth?