by Garth Sundem
Prev NEXT
5 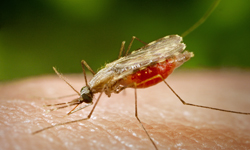 Anopheles mosquitoes are a well-known carrier of malaria, especially in Central America.
U.S. Department of Health and Human Services/Centers for Disease Control and Prevention

The Romans offered the first cure for malaria: an amulet worn around the neck, inscribed with the powerful incantation "abracadabra" [source: Shah]. Over the years, we've attempted various other cures: adding oil to stagnant puddles to smother mosquito larvae, using pesticides, vaccines and nets, and even leveraging high-tech solutions such as a laser that shoots mosquitoes in midair. But the disease continues to infect 300 million people every year, killing 1 million of them [source: Shah].

The Wall Street Journal reports that malaria is responsible for half of all human deaths since the Stone Age [source: Shah].

Granted, that statistic extends the origin of the disease back in time past its first definite mention, which was in the Chinese "Nei Ching" ("The Canon of Medicine"), around the year 2700 B.C.E. [source: CDC].