by Garth Sundem
Prev NEXT
2 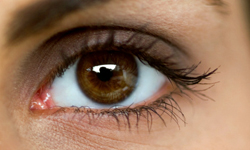 Unlike in healthy eyes like this one, the eyelashes of trachoma patients turn toward the cornea, eventually resulting in blindness.
Mediaimages/Photodisc/Thinkstock

Trachoma is a chronic infection of the upper eyelid that eventually results in the eyelid constricting and turning the eyelashes in toward the cornea. Over time, the rubbing of the constricted eyelid and especially the eyelash makes the patient go blind. This is what happened to Aetius, Paulus Aeginetus, Alexander, Trailaus, Horace and Cicero. And trachoma is described in Hippocrates and in the Egyptian Ebers papyrus [sources: Siniscal and Nunn].

But researchers make a compelling case for earlier trachoma found in a corner of the world little associated with early diseases: Australia. Aboriginal skeletons from 8000 B.C.E. show a common skull lesion around the eyes [source: Webb]. Scientists determined that these lesions were due to bone infection that had come from soft tissue infection. Though there are a few eye diseases that could fit this bill, the skeletons were found in the Australian region in which trachoma is most common today.