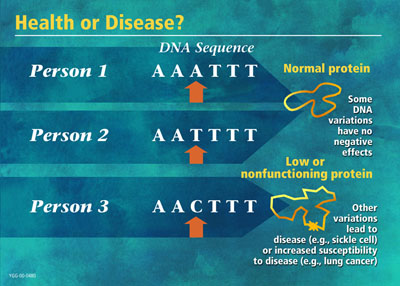 Variations in the sequence of genes during can have important consequences and cause disease.
Photo courtesy U.S. Department of Energy Human Genome Program

­In the h­uman genome, there are 50,000 to 100,000 genes. As DNA polymerase copies the DNA sequence, some mistakes occur. For example, one DNA base in a gene might get substituted for another. This is called a mutation (specifically a point mutation) or variation in the gene. Because the genetic code has built-in redundancies, this mistake might not have much effect on the protein made by the gene. In some cases, the error might be in the third base of a codon and still specify the same amino acid in the protein. In other cases, it may be elsewhere in the codon and specify a different amino acid. If the changed amino acid is not in a crucial part of the protein, then there may be no adverse effect. However, if the changed amino acid is in a crucial part of the protein, then the protein may be defective and not work as well or at all; this type of change can lead to disease.

As noted above, there is lots of extra DNA in the human genome that does not code for proteins. What this extra non-coding DNA does is actively being researched. Perhaps some of it is merely spacing to hold the genes a certain distance apart for the enzymes of transcription. Some might be places where environmental chemicals might bind and affect DNA transcription and/or translation. Also, within this extra DNA, there are many variation sequences that are used in DNA typing (see How DNA Evidence Works).

The Human Genome Project (HGP) was initiated in the 1990s with the goal of determining the sequence of the entire human genome. What genes were present? Where they were located? What were the sequences of the genes and the intervening DNA (non-coding DNA)? This task was monumental, along the order of the US Apollo Project to place a man on the Moon. The HGP scientists and contractors developed new technologies to sequence DNA that were automated and less expensive.

Basically, to sequence DNA, you place all of the enzymes and nucleotides (A, G, C and T) necessary to copy DNA into a test tube. A small percentage of the nucleotides have a fluorescent dye attached to them (a different color for each type). You then place the DNA that you want to sequence into the test tube and let it incubate for a while.

During the incubation process, the sample DNA gets copied over and over again. For any given copy, the copying process stops when a fluorescent nucleotide gets placed into it. So, at the end of the incubation process, you have many fragments of the original DNA of varying sizes and ending in one of the fluorescent nucleotides. For an animation of this process of DNA sequencing, visit DNA Interactive, go to Techniques, then Sorting and sequencing.

DNA technology will continue to develop as we try to understand how the elements of the human genome work and interact with the environment.

For lots more information about DNA and related topics, check out the links below.

A gene in your DNA codes for an enzyme (type of protein that speeds up a chemical reaction) that allows you to break down a specific amino acid called phenylalanine found in milk. In some individuals, this gene is missing or defective. They do not make the enzyme and cannot break down phenylalanine. As infants, if these individuals receive regular milk or milk products, the unbroken phenylalanine will accumulate and cause brain damage (The disease is called phenylketonuria). Fortunately, a genetic test is conducted at birth that can identify these babies, who can then be fed milk products lacking phenylalanine (such as soy milk).