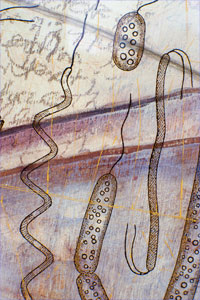 These artist's depictions of single-celled organisms fall in the Monera kingdom, home of prokaryotes.
Harnett/Hanzon/Getty Images

­Every year, researchers discover and name thousands of new species. In recent years, microorganisms have formed an important part of this enormous growth in species discovery. More than 2 million species have been identified around the planet, but some experts speculate that 100 million or more may exist [source: Thompson].

But there's more to finding new species than naming and cataloging them. And for comparing living creatures, nothing beats a good classification system. The two most popular methods in use are the five kingdom and the three domain systems. Created in the late 1960s, the five kingdoms separate life into Monera, the kingdom of prokaryotes (cells lacking membrane-bound nuclei and organelles) that includes bacteria, as well as four eukaryotic (cells with membrane-bound nuclei and organelles) kingdoms: Protista, Fungi, Plantae and Animalia.

For a short while, the five kingdoms seemed to serve scientists well. But in the 1970s, a scientist named Carl Woese decided to classify organisms based on genetic differences rather than differences in visual appearance. When Woese began his classification efforts, he noticed that there were distinctions between some types of organisms that had been previously lumped together as bacteria because they were all prokaryotes. Woese found that bacteria and this other, previously unidentified group of organisms had likely split apart from a common ancestor billions of years ago. Thinking that these other organisms deserved their own category, he divided the Monera kingdom of prokaryotes into archaebacteria (later called archaea) and eubacteria. His third domain was reserved for eukarya. We'll explain those terms in a second.

­Woese found that many archaea were extremophiles and considered this fact evidence of their ancient provenance ("archaea" means ancient). ­Archaea are a diverse group of organisms with their own unique type of rRNA, different from bacteria­. (rRNA produces polypeptides, which help to form proteins.) In many cases, extremophile archaea have developed mechanisms relating to their cell membranes to protect them from hostile environments.

The second domain of eubacteria, meani­ng "true bacteria," are prokaryotes that developed more recently than archaea. These bacteria are the types that tend to get us sick.

Woese's broad third domain, eukaryota, covers anything that has a nucleus and can be subdivided into kingdoms like protista, fungi, plantae and animalia. Some eukaryotes also can do well in extreme environments.

Examining these classification methods can create some confusion and debate -- which system is better? -- but they can also illuminate some of the important differences between extremophiles and other organisms.

Before we look at a few of the environments extremophiles favor, here's a list of some additional names used to classify specific types of extremophiles:

­On the previous page, we mentioned halophiles and endoliths. There are also methanogens, some of which live in cows' intestines and produce methane as a byproduct. Toxitolerant extremophiles do well in highly toxic conditions, such as the radiation-charged area around the Chernobyl nuclear site.

Carl Woese has called classification systems "arbitrary" but acknowledged that they help to understand how living things relate to one another [source: The Why Files]