Putting Thermus Aquaticus and Other Extremophiles to Work 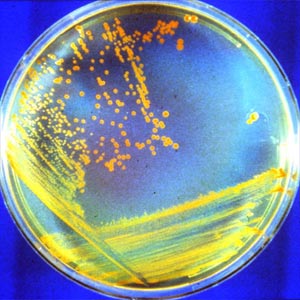 D. radiodurans is hardier than any human astronaut we'll likely send into space. These bacteria could survive life on another planet.
Michael Daly/DOE/NASA

In the 1960s, Dr. Thomas Brock, a biologist, was investigating bacteria in Yellowstone National Park's hot springs when he stumbled upon something unprecedented. Bacteria living in the area were thriving at extraordinarily high temperatures. The newly named Thermus aquaticus lived in water that was nearly 212 degrees Fahrenheit (100 degrees Celsius) -- practically boiling.

T. aquaticus provided the basis for two groundbreaking discoveries in biology. It proved to be the first archaea. (Remember archaea are a diverse group of organisms with their own unique type of rRNA, different from bacteria.) Equally significant, this extremophile produced an enzyme known as TAQ polymerase, which found an industrial application in PCRs (polymerase chain reactions). PCR allows scientists to replicate a piece of DNA billions of times over a span of a few hours, and without the process, nearly all work requiring DNA replication, from forensic science to genetic testing, wouldn't be possible.

Other extremophiles have proved useful in industrial and medical research applications, though likely none so much as T. aquaticus. Scientists have examined at least one extremophile that produces a protein similar to one found in humans. This protein appears to play a role in various autoimmune diseases and conditions like arthritis. Enzymes from alkaliphiles are used for making laundry and dishwashing detergents. They are also used for removing hair from animal hides. Another alkaliphile from Yellowstone is used in making paper and treating waste because it produces a protein that breaks down hydrogen peroxide.

­NASA is studying an extremophile, Deinococcus radiodurans, which is extremely resistant to radiation. This microbe can withstand doses of radiation 500 percent higher than would be lethal to humans [source: Biello]. Interestingly, the radiation actually does break the microbe's DNA into pieces. But in many cases, the DNA can reassemble and work normally again. It accomplishes this by shedding broken parts of DNA, using a special enzyme to attach good DNA to other still-healthy pieces of DNA, and then creating complementary pieces to­ bond to these newly formed long DNA strands. Understanding how D. radiodurans does this could allow scientists to bring dead cells back to life. For NASA, harnessing this DNA-resistance could offer clues for building better spacesuits or spacecraft.

­On the next page, we're going to consider how the study of extremophiles has altered scientists' search for life beyond Earth.

Learning from the Best

The E. coli bacterium has mechanisms for withstanding acid similar to some acidophile extremophiles.