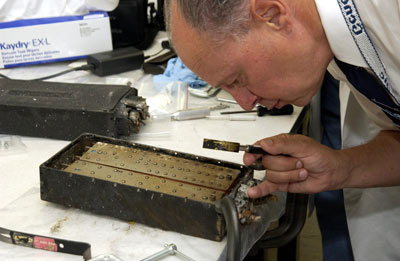 So far, bacteria seem more adept at space travel than we are. Here, a scientist moves part of the growth of bacterial biofilm on surfaces during spaceflight (GOBSS) experiment. If only bacteria could talk!
Image courtesy NASA

­Panspermia is the idea that primitive life forms could travel between planets and survive the journey. For some, panspermia represents a possible origin of life on Earth, as microbes from other planets could have arrived here and acted as the forebears of all subsequent developing species. The concept is often ridiculed as unrealistic and speculative, but several recent studies have lent panspermia more credibility.

One study found that some tardigrades, microscopic eight-legged invertebrates, were able to survive after spending 10 days exposed to space and solar radiation. Between various other research efforts, scientists have found that organisms classified as bacteria, lichens and invertebrate animals have survived at least some time spent in the vacuum of space. Some protection from radiation, such as being on a rock, seems to help organisms survive the journey. But wherever they land, these space travelers need an environment that will allow them to live and grow.

So with these ideas in mind, is it fair to say that we humans might be aliens? One popular panspermia theory holds that earthly life originated on Mars, which, about 4.5 billion years ago, was far more hospitable to life than our planet [source: Britt]. In addition, the Late Heavy Bombardment, a period of numerous asteroid impacts on Earth and Mars, might have brought life to Earth around 4 billion years ago. But if this is true -- and many scientists don't think it is -- life almost certainly didn't come from other solar systems or stars. The distances are still considered too great for life to have survived.

Instead of a rather farfetched theory like panspermia, the answers to our origins may come through astrobiology, the study of life throughout the universe. Astrobiology draws heavily on the study of extremophiles because of the belief that life forms beyond Earth may be residing in extreme environments. But astrobiology isn't just a quest for life in other parts of the universe. It also examines basic questions about the origins of life, environments that are conducive to life, how life develops and the limits of what life can tolerate.

Central to astrobiology is the search for the original ancestor of all living things on Earth, ­variously referred to as the Last Universal Common Ancestor (LUCA), the Last Common Ancestor (LCA) or the Cenancestor. Scientists believe that LUCA was an extremophile that lived more than 3 billion years ago in a harsh, anaerobic environment. Even so, scientists are also debating what came before that, going back in time from DNA-based organisms (like humans and LUCA), to RNA-based ones, finally to the First Living Organism (FLO).

But this quest points us toward even more basic questions: namely, what is life? (Related to this idea, consider: Are we 10 years away from artificial life? and Are we looking for aliens in the wrong places?) Is life just a bundle of amino acids? Similarly, when, exactly, did Earth shift from a chemical world to a biological one? Is life something that can replicate itself? Something that can evolve? In probing these questions of where we come from, extremophiles, those strange survivors from our past, will surely be part of biology's exciting future.

­If you want to know more about extremophiles, the search for life on other planets and other related topics, look over the links below.