by Jesslyn Shields Aug 8, 2019
All living things, plant and animal, are made up of strikingly similar microscopic building blocks called cells, the basic structural and functional units of life. jack0m/Getty images/HowStuffWorks

From the outside, plants seem pretty different from animals. For instance, plants can't walk around and catch food like we do, they give off oxygen instead of carbon dioxide, and they don't have the same sensory organs that help us get out of the way of a fire or sniff out and hunt down a potential meal. But plants and animals are more similar than they seem from the outside. In fact, under a microscope, a plant cell and an animal cell might seem so similar, in some cases you'd really have to know what you're looking at to tell the difference between them.

This is because plants and animals both belong to the domain Eukaryota — organisms with cells that are basically sealed baggies full of fluid suspending little factories called organelles, which have different jobs in the cell, depending on the needs of the organism. Plants, animals, fungi and protists are all eukaryotes; these organisms are made up of one or more cells with a variety of membrane-bound organelles, including the nucleus — the big boss organelle that contains all the DNA and all the instructions for making that particular bear or ringworm or ficus tree or fruit fly.

Even though a blueberry bush and a corgi don't seem to have much in common, on the spectrum of things, their cells are way more similar to each other than they are to those of a bacteria or archaea, which are both prokaryotes — single-celled organisms that are generally smaller than eukaryotic cells, lack a nucleus to hold their DNA, and contain only a few types of rudimentary organelles. It's kind of a mess inside a prokaryotic cell, while a eukaryotic cell is highly structured. But at the end of the day, eukaryotes and prokaryotes have more in common with each other than they do with a rock. So, there's that.

If plants and animals are so similar on a cellular level, why do they seem so different when you take a couple steps back? Well, it's because plants and animals have different goals — each of their eukaryotic cells is customized to make them great at being the thing they are. For instance, it's a plant's job to take carbon dioxide out of the air — which we animals just leave lying around every time we exhale or get in our car — and add a little sunlight and water in order to make literally everything they need to survive. Animals, on the other hand, require oxygen (made by plants) to breathe, but we can't make our own food like plants do, so we've got to go rustle up our own grub. This requires movement, which made it necessary for animals to evolve all kinds of crazy specialized cell types, tissues and organs that a plant can't make because they simply don't need them. Survival is based on getting basic needs met, and the outsourced requirements of an animal far surpass those of plants.

Here is a diagram of a typical animal cell:

Animal cells are eukaryotic cells, enclosed by a plasma membrane and containing a membrane-bound nucleus and organelles.
jack0m/Gety images

Even though their cells are constructed similarly, plants and animals have different cellular settings. A really obvious difference is in the outer shell of the cell. In addition to a cell membrane, plants have cell walls made out of tough compounds called cellulose and lignin, which makes them rigid and tough — useful for keeping trees from collapsing into gelatinous piles of plant tissue. Animal cells, on the other hand, are contained within the thin cell membrane, a flexible container a lot like a like a semi-permeable sandwich bag — it provides nothing in the way of structure, but it can regulate what comes in and out of the cell, and it can keep all the organelles contained within it.

Animals have all kinds of fancy organelles that help them form some pretty mind-blowing structures like bones, muscles and nerves — these organelles are what allows animals to build empires, honestly. But one organelle animals don't have is the chloroplast, which allows plants to photosynthesize, or make sunlight into glucose compounds. So, any green you see on a plant — the leaf, the stem, in the peel of an unripe banana — all comes from the chloroplasts in their cells. Turning light into food — try that, animals!

Here is a diagram of a typical chloroplast-containing plant cell:

One other important difference between plant and animal cells can be found in another organelle called a vacuole. Some animal cells contain vacuoles, but in a plant cell they're really large and have an important job: keeping the plant from wilting. Vacuoles are basically intercellular water balloons that keeps the cell plumped up from the inside by creating turgor pressure, pushing the cell membrane against the cell wall and helping the plant keep its shape. If you've ever seen a pitiful carrot at the bottom of your crisper drawer, all floppy and unappetizing, it's the loss of turgor pressure in its vacuoles that ultimately landed it in the compost bin.

And that's about all that separates you from a plant! Remember that at your next family reunion.

Now That's Interesting
The word eukaryote means "true kernel," referring to the nucleus — the biggest, fanciest organelle of them all. 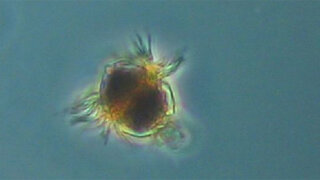 This Organism Is Part Plant and Part Animal 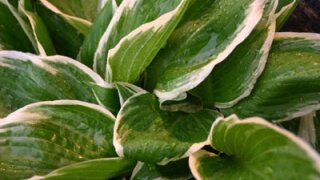 How do plants compare to solar cells when it comes to collecting solar energy? 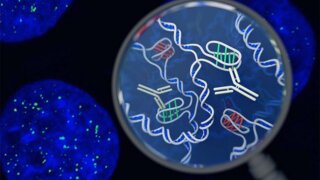