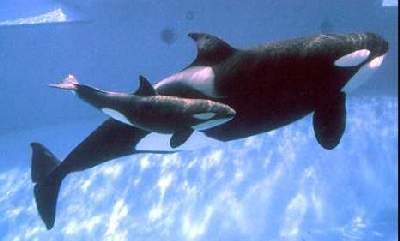 The book "Extinct Humans," by Ian Tattersall and Jeffrey Schwartz, puts it this way:

...in every generation, many more individuals are produced than ever survive to maturity and to reproduce themselves. Those that succeed -- the "fittest" -- carry heritable features that not only promote their own survival but are also passed along preferentially to their offspring. In this view, natural selection is no more than the sum of all those factors that act to promote the reproductive success of some individuals (and its lack in others). Add the dimension of time, and over the generations natural selection will act to change the complexion of each evolving lineage, as advantageous variations become common in the population at the expense of those less advantageous.

Let's look at an example of natural selection from How Whales Work.

The ancestors of whales lived on land -- there is evidence of the evolution of the whale from life on land to life in the sea (read How Whales Work for details), but how and why did this happen? The "why" is commonly attributed to the abundance of food in the sea. Basically, whales went where the food was. The "how" is a bit more perplexing: Whales are mammals, like humans are, and like humans, they lived and walked on solid ground, breathing air into their lungs. How did whales become sea creatures? One aspect of this evolution, according to Tom Harris, author of How Whales Work, is explained as follows:

To make this transition, whales had to overcome a number of obstacles. First of all, they had to contend with reduced access to breathable air. This led to a number of remarkable adaptations. The whale's "nose" moved from the face to the top of the head. This blowhole makes it easy for whales to breathe in air without fully surfacing. Instead, a whale swims near the surface, arches its body so its back briefly emerges and then flexes its tail, propelling it quickly to lower depths.

Odd as it seems that the whale's "nose" actually changed positions, the theory of evolution explains this phenomenon as a long process that occurs over perhaps millions of years:

Natural selection selects those genetic mutations that make the organism most suited to its environment and therefore more likely to survive and reproduce. In this way, animals of the same species who end up in different environments can evolve in completely different ways.