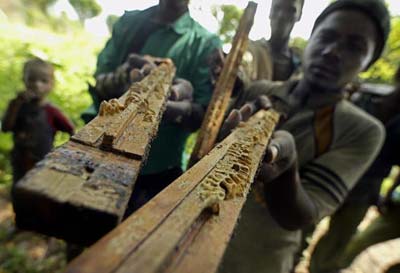 Members of Kenya's coastal hunter-gatherer tribe, the Boni, hold up dried-up honeycombs. The Boni, now numbering only about 4,000 members, have maintained a traditional lifestyle of hunting and gathering alongside paltry agriculture.
TONY KARUMBA/AFP/Getty Images

Every human group survived as hunter-gatherers for thousands of years. About 10,000 years ago, humans first developed farming technology. This technology didn't develop at one location and then slowly spread throughout the world -- it appeared independently in many different places. Agriculture was successful because it could support greater populations with less land. The end of the Ice Age improved climate conditions in many regions, making farming more lucrative. While many societies maintained a hunter-gatherer existence even into modern times, the success of agriculture effectively ended the widespread constant human migrations that were part of the nomadic hunter lifestyle worldwide. Humans still migrated after the development of farming, but it was no longer the central aspect of their lives.

The migration that did occur was still driven by the same basic reasons -- climate and food. Instead of migrating to follow animal herds, people would migrate to areas of better soil. Without modern farming techniques, early farmers could use up all the nutrients in the soil within a generation or two, forcing migration to unfarmed land. Climate shifts could cause droughts or floods that forced migrations as well.

Migrations tend to follow paths where resources are easy to come by. Coasts and rivers, which provide fish and fertile land, are almost always settled first. Humans didn't push inland or into less hospitable areas until population pressures forced them to.

Agriculture had an enormous effect on humanity. It formed the basis for all modern human civilization. The end of constant migration and the ability to support larger populations lead to the creation of cities, states, governments, organized religions, monetary systems and militaries. None of these would be possible with a nomadic population.

­The thousands of years which followed the development of agriculture were certainly not migration-free, but the next event that wrought massive changes on the nature of migration was the Industrial Revolution. During the 17th and 18th centuries, the Industrial Revolution mechanized the production of goods and food. It also lead to the ongoing urbanization of the world. Prior to the Industrial Revolution, communities remained relatively small, with decentralized economic centers that served each town. For example, a town might have a mill that processed grain from a few nearby farms and a few small manufacturing facilities run by local craftsmen. Industrialization saw the dawn of factories, massive manufacturing centers that offered hundreds or thousands of jobs. People migrated from rural or semi-rural areas to cities to take advantage of these plentiful jobs.

­In 1790, New York City had a population of about 33,000. Fifty years later, it had grown tenfold, to more than 300,000 [source: U.S. Bureau of the Census]. That growth rate far exceeds the growth in the national population [source: U.S. Bureau of the Census]. As of 2005, almost half of the people in the world lived in a city, a number that has risen continually and is predicted to continue rising [source: UN]. Some countries are urbanized at levels up to 80 or even 90 percent [source: World Development Indicators].

­Until the U.S. abolished slavery during the American Civil War, Europe and North America participated in a vigorous and profitable trade of slaves. People were captured in Africa and sent over by the thousands on slave ships. Once in America, they would be sold in markets and forced to work for the rest of their lives.

This was a unique type of migration in that the Africans were not driven by any of the usual population pressures. Millions of Africans (by some estimates, up to 20 million) were forcibly moved to a different continent [source: University of Calgary]. This was a massive influx of people into the New World who otherwise would not have migrated there in such numbers.