Other Reasons to Migrate 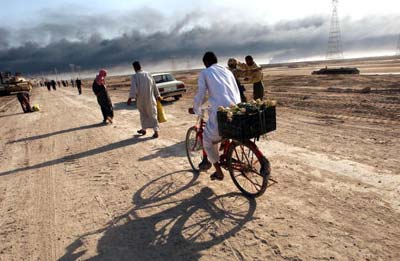 A man carries produce on his bicycle near the entrance to the besieged city of Basra, Iraq as civilians flee due to the war.
Spencer Platt/Getty Images

War and politics - One could argue that almost every conflict in human history can be traced to population pressure, which means that war and political oppression might just be symptoms of population pressure. It was oppression that drove English Puritans to settle in North America after first fleeing England for Holland. Today, an estimated two million refugees have fled their home country of Iraq as a result of the war, dispersing themselves throughout the Middle East; another two million have been displaced from their homes within Iraq [source: Human Rights Watch].

Economics - In terms of population pressure, money is a stand-in for food. Ever since the Industrial Revolution, few people grow and harvest the food they eat. We purchase it instead. Now, instead of moving to where the food is, people move to where the money is. These migrations can be slow shifts, such as the decline of population in the northeastern U.S. as the steel industry declined. They can also happen quickly. A major new factory built in a town can draw thousands of workers, plus thousands more who will earn money selling food, clothing and entertainment to the workers.

This illustrates the fact that economic migrations don't follow the same patterns as food migrations. Where food is concerned, higher populations make it harder for everyone to get enough food. Conversely, economies thrive on saturated population levels. More people equals more money.

­The human spirit -­This form of population pressure can't really be measured, but it shouldn't be taken lightly. Humans have an innate desire to explore and colonize new territories. Even when not driven by hunger, politics or economics, humans migrate.

When the Nazis rose to power in Germany in the 1930s, many Jews emigrated (the term for migrating out of a place; immigration is the term for migrating into a place) to other parts of Europe. Following Kristallnacht, a two-day pogrom in which hundreds of Jews were killed, thousands arrested and all Jewish-owned business, synagogues and homes smashed and burned, a flood of Jews poured out of Germany and Austria. Almost 400,000 Jews had left by 1940.

Yet escaping the Nazis did not guarantee safety for the refugees. While many of them were accepted in the United States and in South American nations, once immigration quotas had been met, most nations would not allow any more refugees to enter. A ship called the St. Louis arrived in Cuba in 1939 filled with refugees. They were denied entry there, and neither the U.S. nor Canada offered them asylum. The ship was forced to return to Europe, and most of the refugees were sent to concentration camps [source: Jewish Virtual Library].