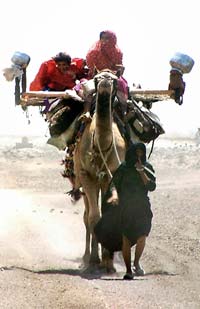 ­What drove those first humans to leave Africa? That's best explained by examining the forces that continue to drive humans to migrate even today.

A population of humans living in a given area faces certain pressures. Those pressures depend on the size of the population, the resources available and the community's ability to exploit those resources.

Food - The most basic population pressure, and the one that likely drove the earliest migrations out of Africa, is food. An area of land can only support a certain population with the food produced there. Modern agricultural techniques and technologies can vastly increase food output, but in the African forests and savannas of 100,000 years ago, humans subsisted by hunting and gathering. If the population grew too large, there wouldn't be enough meat or fruit to feed everyone. A portion of the population could simply move a few miles away to find new hunting grounds. Humans may only have moved a few dozen miles per generation, but over tens of thousands of years, this slow but inexorable migration spread humans throughout Europe and Asia.

Space - You can only pack so many humans into a given space. Improvements in medical and sanitation technology make the exact limit enormously variable, and often far higher than the food limit mentioned above, but at some point the population becomes too large for the area. This can lead to outbreaks of violence or the spread of virulent diseases. A general decline in living conditions leads some people to move elsewhere.

Weather and climate - In the short term, weather events can drive a population out of one area. Flooding and severe storms can cause this. Long-term migration patterns have been shaped by climate change. A drought that turns a once-fertile area into a desert will drive the population to find a new home. Changes in sea level can reveal large stretches of coastal land. Massive sections of frozen ocean that occurred during the most recent ice age gave humans access to parts of the world they might not otherwise have reached [source: INSTAAR].