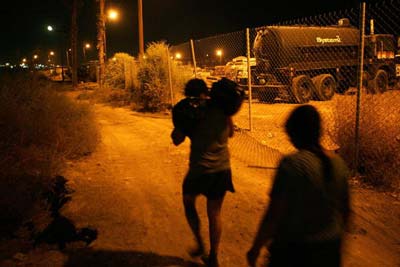 Migration in the modern world has one key difference from earlier forms: national borders. Borders block attempts to migrate, limit migration to certain groups or quotas and restrict migration to certain economic classes. While migration is still driven by the same basic pressures, it is now artificially shaped by political forces as well.

Most modern migration follows economic patterns. People are always seeking better economic opportunities. For decades, this lead to a migratory flow in North America of south-to-north. Northern cities had plenty of industrial jobs and were economic centers. Industrialization had been delayed in the American south and in Mexico, so people there moved north to get jobs. This exact same drive is what fuels migration from Mexico to the United States today.

However, beginning in the 1980s, U.S. migration started moving from north to south. The old industries that had drawn so many southerners in decades past were failing or moving due to pressures from foreign competitors. Meanwhile, cities in the south and west were capitalizing on newer technologies, opening up new industries and offering plentiful jobs. Between 1995 and 2000, the largest movement from one state to the other was from New York to Florida (source: U.S. Bureau of the Census].

In Europe, migration is following a similar pattern. Plentiful jobs in wealthy European nations are drawing an influx of immigrants from Turkey, Pakistan and other areas of the Middle East.

­Where will humans migrate to next? Some suggest it is inevitable that we will someday colonize space. There are many reasons people have looked to space as the migration destination. There are resources to be exploited. There is space for people to live, increasingly an issue as the world population grows. For some, survival of the race is the imperative -- if an asteroid or nuclear war wiped out life on Earth, space colonies could carry on our culture and very existence. Some may be motivated like the Pilgrims to make a new start and create a nation that conforms to their vision of a perfect world.

­A lot of work lies between us and the first true space colony. There are numerous problems to be solved, such as overcoming the long-term effects of weightlessness on humans, successfully navigating the vast distances between planets and creating the basic resources necessary for humans to live (water, air and food, specifically). Perhaps the drive that will ultimately lead us to accomplish space colonization is the intangible one we mentioned earlier -- the human spirit.

If you're interested in learning more about humans migrating and related topics, try the links below.

Not every culture has adopted a settled, urban lifestyle. There are still small groups that maintain a nomadic existence, moving from town to town selling goods and services and staying wherever people will take them (usually such places are few and far between). The Irish Travellers and the European Roma are two examples of such people. They pass along their traditions to succeeding generations, rarely integrating into mainstream society. They ­speak their own archaic languages, teaching their children themselves. Though often persecuted, many of these groups are protected by laws with the intent of preserving their rare heritage.