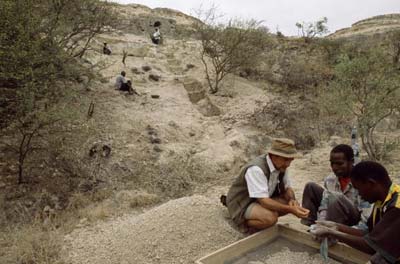 No historical record exists that tracks the migratory patterns of the earliest humans. Scientists piece together the story of human migration by examining the tools, art and burial sites they left behind and by tracing genetic patterns. They accomplish this by looking at mitochondrial DNA (mtDNA), which is passed from a mother to her offspring without being blended with the genetic code of the father. We can look at the mtDNA of two people who lived thousands of miles and years apart, and if their mtDNA genetic code is the same, we know they were ancestor and descendant [source: PBS NOVA].

Examining mtDNA is useful for another reason -- it accumulates mutations relatively quickly. Scientists can see how many mutations are present and roughly determine how old that genetic line is. By comparing the number of mtDNA mutations found in people from different locations, we can tell where humans arrived first. The more mutations, the longer humans have lived in that area. All of the mtDNA found in certain parts of Africa has more mutations than any other mtDNA in the world. This evidence strongly supports the Out of Africa theory. However, even with these clues, much about early human migration is uncertain.

When humans first left Africa, they followed the coasts, where resources were abundant. The first wave moved across the Middle East, into southern Asia, and eventually all the way down to Australia [source: National Geographic]. This occurred roughly between 90,000 and 30,000 years ago. Additional waves of migration followed. Between 40,000 and 12,000 years ago, humans moved north into Europe. However, their range was limited by an ice sheet that extended into the northern part of continental Europe.

The icy conditions at the time also helped expand early humanity's territory. A massive sheet of ice, combined with lower sea levels, formed a bridge between Siberia and Alaska that we call Beringia. The first humans crossed over 30,000 years ago, moving down the west coast of North America. Other sources suggest a more recent North American migration, starting about 15,000 years ago. New evidence seems to keep pushing the date of first North American habitation further and further back. Humans eventually spread into South America and pushed east into what is now the eastern United States and Canada. This theory of North America's settlement is supported by mtDNA evidence and a similarity in the dental structures of Siberian and North American populations of the era.

There have long been competing theories that early humans crossed the Atlantic Ocean, either from Africa to South America or the Caribbean, or from Europe to Greenland to North America. While it may have been possible to make such a trip using available seafaring technology, it is unlikely that a large-scale migration occurred in such a way.

The initial spread of humanity across the Earth was driven primarily by food and climate. Nomadic tribes of up to a few dozen people likely followed the migration patterns of the herd animals they hunted. Climate change opened new areas for hunting, even as technology such as mastery of fire and meat preserving allowed humans to live in less-than-ideal conditions. The human ability to adapt to new circumstances not only gave early humans an advantage over Homo erectus, it also facilitated global expansion.

The migration from Siberia to North America might not have been made over an ice/land bridge. Another theory suggests the settlers used a sea route that hugged the coasts and islands along the way­. They stopped at the small pockets of land that weren't covered in ice, eventually getting far enough south that the land was free of ice altogether [source: ­National Geographic].