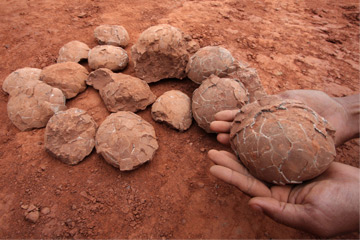 Let's crack one of these open and start building a dinosaur. Or not. A construction worker displays one of 22 dinosaur egg fossils found at a construction site in Nankang. The egg fossils had a diameter of 3.9-4.7 inches (10-12 centimeters). See more fossil pictures.
© Xu Chaoyang/Xinhua Press/Corbis

When paleontologists first uncovered a cluster of Jurassic dinosaur embryos in China in 2010, two events probably occurred almost at once: Steven Spielberg secured the movie rights, and Povich's people booked the fossilized remains for a "Who's the Baby Daddy" episode of "Maury."

But scientists rejoiced for a much simpler reason: the opportunity to figure out how such big things grew from such small packages.

It's a subject about which we know surprisingly little, as paleontologist Jack Horner explained in his 2011 TED talk. After examining the microscopic structures of several bones, Horner determined that certain dinosaurs underwent the same pattern of bone growth as some of their bird descendants. Just as a cassowary doesn't develop its characteristic bone ridge until late in life, some dinosaurs retained juvenile features into near adulthood. It turns out paleontologists had read the bones all wrong: Five supposedly distinct Cretaceous species were actually younger versions of known dinosaurs [source: Horner].

Clearly, more information is needed, and that 2010 discovery of a Lufengosaurus colony's nesting site (and the related 2013 paper published in Nature) is exactly the bonanza scientists were looking for. The site contained 200 bones of the long-necked plant eater's offspring, along with bone fragments and eggshells -- altogether comprising several nests and at least 20 embryos in various stages of development. Estimated at between 190 and 197 million years old, they are the oldest dinosaur embryos ever found [sources: Reisz et al.; Than].

That was more than enough to keep paleontologists and dinophiles alike geeking out for weeks, but there was more. Almost as a footnote, scientists announced that among the bones they had also detected "organic residues, probably direct products of the decay of complex proteins" [source: Reisz et al.]. Soon the inevitable question was raised: Can we finally resurrect dinosaurs?

The question isn't as crazy as it used to be, but the answer is still no. Despite astonishing leaps forward in the fields of genetics and genomics, practical problems with obtaining and cloning dino DNA likely make "Jurassic Park" an impossibility, even as ethical concerns and unintended consequences might make us wonder if it's even a good idea to try.

Egged on by Advances

In the 1994 movie "Dumb and Dumber," Mary Swanson tells Lloyd Christmas that their chances of ending up together are "one out of a million," to which he replies, "So you're telling me there's a chance."

Paleontologists must sometimes feel like Mary when answering questions about dinosaur de-extinction. They must also wonder how so many people could watch "Jurassic Park" and its sequels and miss the persistent theme of unintended consequences.

Does the discovery of dino embryos open up a new avenue to reptilian rebirth? The answer is no. Dinosaur eggs are tens to hundreds of millions of years past their Use By date, and fossilized to boot -- not exactly prime incubator material. As for the embryos, they are just so many piles of bone. Not much help there.

What about the organic material -- have we finally dug up dinosaur DNA? Not exactly. Paleontological circles have been debating possible organic tissue finds for years, but they have yet to find DNA (and likely never will -- see sidebar).

Needless to say, people got a little excited. In a game of inches like paleontology, such a find amounted to a touchdown, but research referees soon rolled back the scoreboard. Upon further review via carbon dating and scanning electron microscopy, they announced that the stringy bits and hollows were not dinosaur tissues but bacterial biofilms -- collections of bacteria bound together by polysaccharides, proteins and/or DNA. They might look the part, but they actually have more in common with tooth plaque than dinosaur cells [sources: Bayles; Kaye et al.].

Whatever their nature, the finds made paleontologists wonder; Might the real thing be out there, waiting to be discovered? They adjusted their techniques and, with the Lufengosaurus nest, struck pay dirt. Exciting? Absolutely. Organic? Sure. DNA? Not by a long shot [source: Reisz et al.].

But suppose it had been?

Advances in genetics continue to inspire dreams of dinosaur clones but suffer from one problematic missing ingredient: DNA. The oldest DNA on record was extracted from an 800,000-year-old Greenland ice core, but in general the maximum survival age of genetic molecules probably falls more in the range of 100,000-200,000 years (one million at most). At best, that places mammoths, giant ground sloths and saber-tooth cats within reach, but not dinosaurs [sources: Gannon; Kolata; Mabry].

Not All It's Cracked Up to Be

Over the past decade, advances in stem cells, salvaging ancient DNA and rebuilding genomes have brought the concept of "de-extinction" -- particularly of genetic cousins of living species -- closer to realization [sources: Kolata; Zimmer]. Just how close, and what this might mean to much more ancient animals, remains less clear.

Using frozen cells, scientists in 2003 successfully cloned an extinct Pyrenean ibex, aka a bucardo (Capra pyrenaica pyrenaica), but it died minutes later [sources: Kolata; Mabry; Zimmer]. For years, Australian researchers have been trying to return the Southern gastric brooding frog (Rheobatrachus silus), the last of which croaked several decades ago, to the lily pad of the living, but the results have yet to last beyond the early embryonic stage [source: Kolata].

Although stumbling, these first steps raise hopes of more ambitious resurrections to come, including woolly mammoths, passenger pigeons and a Yukon horse extinct for around 70 millennia -- which sounds like a long time, until you realize it's only one-tenth of 1 percent as long ago as the most recent dinosaur extinction [source: Kolata].

Even if dino DNA were no older than yesterday's yogurt, however, numerous ethical and practical concerns should cause all but the maddest scientists to hesitate before sending in the clones. After all, how would we regulate such a process? Who would perform it and when? How would de-extinction affect the Endangered Species Act? What of the pain and suffering experienced by failed attempts? Might we breed dead diseases back into existence, or end up with the equivalent of invasive species on steroids [sources: Kolata; Mabry]?

There are upsides, of course. Much like the reintroduction of wolves to Yellowstone Park, "rolling back" recent extinctions could help restore balance to damaged ecosystems, and some say mankind owes a debt to the animals it has offed [sources: Kolata; Mabry; Zimmer].

For now at least, the DNA issue makes the question academic. It is conceivable that a much more recent creature, such as a frozen woolly mammoth, might produce an intact (if freezer-burned) cell, but as far as dinosaurs are concerned, Lufengosaurus' broken-down proteins might be the closest we ever come to "Jurassic Park" [source: Kolata].

Alternatively, they could try to "back-breed" an ancestral animal into existence by mating descendants with distinctive genes inherited from it. Since 1945, some German breeders have claimed to have accomplished the feat with the aurochs (Bos primigenius), an extinct wild ox and progenitor of modern cattle, but scientists remain dubious [sources: Encyclopaedia Britannica; Kolata].

Back-breeding and Filling in the Blanks

There's more than one way to skin an extinct saber-tooth cat. Scientists could take fragments of DNA and knit them together with sequences from living cousins, much as avian, amphibian and reptile DNA filled genetic gaps in "Jurassic Park." They could then clone the modified cells [source: Kolata].

Author's Note: Could we resurrect dinosaurs from fossil embryos?

For every botanist who fears Cretaceous kudzu, there are two pharmaceutical reps salivating over Mesozoic Minoxidil. Me, I side with the folks who are in it for the wonder, pure and simple -- the wonder born of books, of bags of varicolored plastic reptiles and of Ray Harryhausen films.

Antarctic Prone To 'Ice Quakes' Every Night, Study Finds
What will Earth look like in 5,000 years?
Green or Blue? The Best Turquoise Is More Valuable Than Diamonds 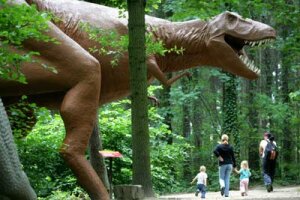 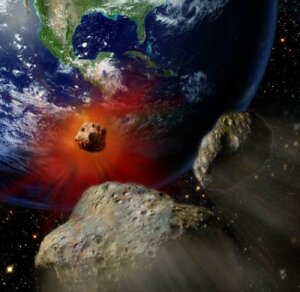 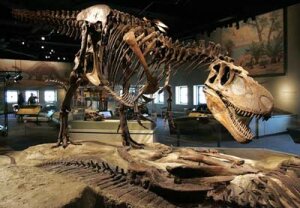