How do scientists know what's inside dinosaur eggs? 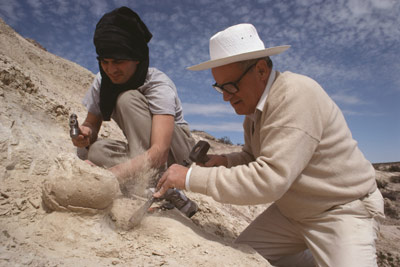 In the past 20 years, paleontologists and other fossil hunters have uncovered a wealth of dinosaur eggs. Chinahas been home to many of these fossil finds, but researchers have also discovered nesting grounds in Argentina, Canada, South Africa and the United States. This is a big change -- until the 1990s, fossilized eggs were a rare find.

By studying these eggs, scientists can learn about a lot more than how dinosaurs reproduced. Eggs and their positions within nesting grounds can yield lots of clues about dinosaur behavior. The structure of the eggs can help scientists figure out whether dinosaurs were more like birds or reptiles. And, in a very few cases, a fossilized egg can show paleontologists what a dinosaur embryo looked like.

­The trouble is, in spite of recent finds, dinosaur eggs are still a lot rarer than dinosaur bones. On top of that, very few eggs that have survived until today still contain their embryos. This is because several specific conditions have to exist for an embryo to fossilize. First, an egg containing a healthy embryo has to be buried in sediment. A f­reshly laid egg, which has no visible embryo, or one that has started to rot will not do. The egg also has to be intact -- if there's a crack in the shell big enough for anything to escape, the material inside will leak out before fossilization can occur.

This buried egg then has to survive the slow process of fossilization. Groundwater containing minerals seeps through the shell, replacing the nonmineral components of the bones inside. Most of the time, soft tissues and fluids inside the egg break down or dissipate instead of becoming fossils. The shell itself is already made of calcium, so it doesn't physically change much during the fossilization process. But, if all goes well, the embryonic skeleton inside turns into rock.

­­The trick for researchers is to figure out how to get the rocky embryos out from the equally rocky eggs. Even though there aren't many embryo-containing dinosaur eggs out there, researchers have managed to get a look at what's inside. You'll learn how on the next page. 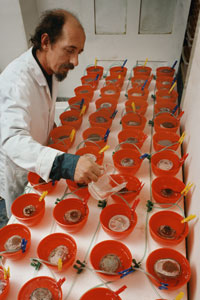 A paleontologist adds a diluted solution of acetic acid to bowls containing fossilized eggs. It takes a year for the acid to remove the shell.
Louie Psihoyos/Science Faction/ Getty Images

Scientists don't always have to break open dinosaur eggs to see what's inside. Occasionally, researchers will find fossilized hatchlings in a nest with whole eggs, giving them a good clue as to what the eggs contain. Other eggs are found broken or weathered, leaving their embryos exposed. For example, a fossil bed discovered in Patagonia was so full of eggs and egg fragments that it became known as Auca Mahuevo, meaning "more eggs." Because of the sheer number of eggs, paleontologists speculate that the entire area was submerged in a flood, allowing lots of silt to cover all the eggs at once.

At the Auca Mahuevo site, researchers found whole eggs containing embryos, as well as eggshell fragments that contained parts of embryos. In a few cases, skin that rested against the inside of the shell became fossilized as well, giving scientists a glimpse at what embryonic dinosaur skin looked and felt like. Based on the embryos found with the eggs, scientists theorize that the dinosaurs that laid these eggs were most likely sauropods, four-legged dinosaurs with long necks.

When there are no convenient hatchlings or broken shells nearby, researchers can use computerized axial tomography (CAT) scans to try to figure out what's inside an egg. A CAT scan, also known as a CT scan, takes lots of X-rays of an object. A computer then combines these X-rays to form a three-dimensional view of the object. Using CAT scans, scientists can figure o­ut whether the egg contains any embryonic material. If it does, they can determine the size and shape of the embryo within the shell.

The other predominant technique used to figure out what's in an egg involves destroying the eggshell. By soaking the egg in a mild acid bath, scientists can slowly remove the shell. This process is time-consuming, but it can eventually reveal the entirety of the skeleton inside. Once the embryonic skeleton is uncovered, researchers saturate it with plastic to preserve it.

But just because an acid bath or a CAT scan reveals the shape of an embryo doesn't mean scientists can figure out what kind of dinosaur it would have grown up to be. Many dinosaurs looked significantly different as hatchlings, adolescents and adults. In some cases, a dinosaur's embryo may look nothing like any known adult dinosaur specimen.

The size and shape of eggs also adds to the complexity. For instance, researchers have asserted that two dissimilar eggs -- one round and the other oblong -- both contained a dinosaur known as a Therizinosaur. To learn more about this and other dinosaur discoveries, browse through the links on the next page.

In 2005, paleontologists found a fossilized Oviraptor pelvis with eggs inside. The pelvis contained two eggs, and their positioning suggests that the species may have formed and laid eggs in clutches of two the way many birds do. This contrasts with the way many reptiles lay large batches of eggs at once.