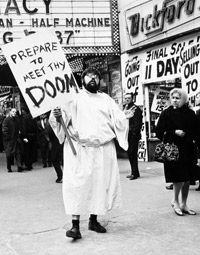 Doom could be nigh, but the European Space Agency wants to make sure civilization will weather the disaster.
Bob Ferris/Taxi/Getty Images

­When a huge chunk of the northeastern United States went dark in 2003, it's likely that a terrorist attack was one of the first thoughts to cross people's minds. It was actually just the result of a tree falling in Cleveland that took out a major power line, causing a blackout in cities all along the coast. The incident didn't le­ad to rioting, looting and a declaration of Martial Law that led to widespread protest and the toppling of the U.S. government, but it could have. You never know.

Call it a dark view of the Butterfly Effect: The end of the world as we know it may not come in an explosion heard round the world or the rapid extinction of entire species that can't survive global warming. Sure, "doomsday" may be a huge, sudden affair, like nuclear holocaust or an asteroid collision, but it could also be the result of a string of several smaller events that leave the human race all but eradicated. Imagine a war that leads to a nuclear detonation that triggers earthquakes, which trigger tsunamis that bring on a period of famine along major coastlines. Throw in bird flu making the inter-species jump and a successful bioterrorist attack and you're looking at very bad news for civilization. (Or just pretend "24" is our reality and Jack Bauer is nowhere to be found.) Even to those of us who aren't fatalists, it doesn't seem completely far-fetched, given recent events.

Enter the so-called Doomsday Ark on the moon. The idea isn't new -- a bunch of surprisingly legitimate and highly respected scientists first suggested the idea in 2006, and while the scoffing was loud, it wasn't deafening enough to shut the concept down. The Alliance to Rescue Civilization, based at New York University and headed up by scientists who have served in upper echelons of government, academia and private research, has big plans for the end of the world. And now, the European Space Agency is involved.

The idea was formally presented in a February 2008 conference in Strasbourg, France. In this article, we'll find out what this "ark" actually is, what it will contain, how it could save humanity, when it could be operational and how viable it really is. After all, a nuclear holocaust that leaves advanced technology intact isn't really a nuclear holocaust. So if the ark is on the moon, how would survivors access it?

We'll get to all that. But first: What exactly could you put on the moon that would help humanity rebuild after complete destruction? ­