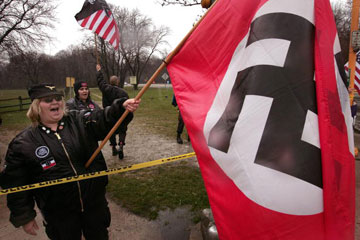 Neo-Nazi protesters demonstrate near where the opening ceremonies were held for the Illinois Holocaust Museum and Education Center.
Scott Olson/Getty Images

In George Orwell's classic cautionary novel "1984," citizens of a future totalitarian society are required to participate in a group exercise called the "Two Minutes Hate." They gather in an auditorium to stare at a large TV screen, as Emmanuel Goldstein, an alleged traitor to the Party, gives a speech critical of its doctrines. Seconds into the event, the pleasant, docile crowd morphs into an angry, volatile mob, screaming insults and throwing whatever objects they can lay their hands on at Goldstein's flickering image. Even Orwell's alienated protagonist, Winston Smith, cannot resist joining in. "A hideous ecstasy of fear and vindictiveness, a desire to kill, to torture, to smash faces in with a sledgehammer, seemed to flow through the whole group of people like an electric current, turning one even against one's will into a grimacing, screaming lunatic," Orwell writes [source: Orwell].

That situation may be fictional, but the terrible, pervasive power of the emotion it depicts is all too real. The word "hate," which comes from the Old English hete, is generally defined as an intense, extreme hostility and aversion to something or someone, usually stemming from fear, anger or a sense of injury [source: Merriam-Webster]. We use it to cover an enormous range of feelings and situations, from the child who "hates" broccoli or doing spelling homework, to the leader of a country who tries to exterminate everyone of a certain religion or ethnicity. It may be intertwined with other emotions, such as fear or anger, but it is distinctly different from them.

In this article, we'll focus on the more extreme kind of hate -- the sort of hate ancient Greek philosopher Aristotle, who in the fourth century B.C. was one of the first to contemplate the intricacies of enmity, called misos. Aristotle defined hate as a dislike for someone based on our negative perception of that person's nature, so intense that whoever feels it wants to cause real harm to another. Aristotle also noted that a person could hate another person or a whole group of people who were seen as bearing the same stain [source: Konstan].

There are several different angles from which to investigate the nature of hatred -- from history to sociology. But first, let's take a look at how hate begins in the brain, and where our ability to hate came from.