Your Brain on Hate 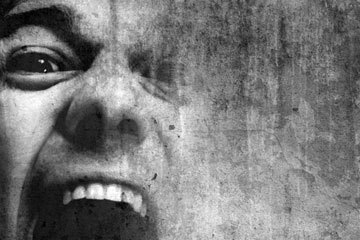 What is happening inside your brain when you feel hatred?
Thinkstock

If you're a heavy metal fan, you've probably heard the Iron Maiden song "There's a Thin Line Between Love and Hate." As it turns out, those lyrics have a grain of truth in them, at least in a neurological sense.

In 2008, scientists at University College London in the U.K. published a study in which they included 17 subjects who'd expressed a strong hatred for another person -- typically, an ex-lover or a colleague. When the subjects' brains were mapped with an MRI scanner while they looked at pictures of the people they hated, activity was observed the putamen and insular cortex -- two brain regions that also light up when a person sees a picture of a loved one [source: Zeki, Robson].

The involvement of the putamen in both emotions is particularly revealing, because that part of the brain also prepares the body for movement. Scientists hypothesize that this area goes into action with the aim of providing protection to a loved one -- to prepare for an aggressive or spiteful act from a hated person [source: Zeki, Robson].

But the researchers also spotted a key difference between the two emotions. When a person sees another person he or she loves, the areas of the frontal cortex associated with judgment and critical thinking typically become less active than normal. But when subjects saw someone they hated, most of the frontal cortex remained active. In fact, the researchers found that when they compared the brain scans to answers that subjects had given on a questionnaire, the more intensively a person said that he or she hated another person, the more energetically the subject's frontal cortex lit up at the sight of the person. So here's the upshot: Hating someone isn't just a knee-jerk emotional reaction. It also involves a certain amount of reasoning and rumination [source: Zeki, Robson].

Hate involves both the interior, primitive parts of the brain and the parts that developed relatively late in human evolution. So our capacity for intense dislike of others of our species may date back as far as 150,000 years, when the first modern humans emerged [source: AMNH.org]. Why hate developed is a murkier question. There's some evidence that humans' ability to hate may actually be an evolutionary adaptation, one that made it easier for a group of hunter-gatherers to justify taking scarce food from competing groups [source: Fishbein].

But even after humans developed agriculture and organized themselves into civilizations, that venomous urge persisted. We'll look at hate's history on the next page.