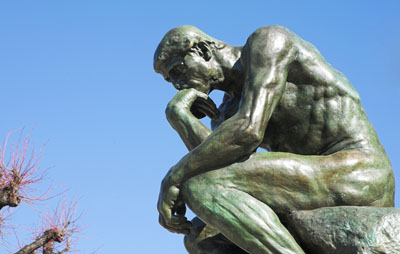 Photo courtesy Forgiss/Dreamstime If this guy got a little mad, would he figure out the answer to what’s puzzling him?

Judging from these tests, it appears that when distinguishing between various arguments, angry people disregard information that's irrelevant to the quality of the argument, such as its source. Neutral subjects, however, give undue preference to those clues. In their report, Dr. Moons and Dr. Mackie wrote that "angry people were routinely sensitive to variations in argument quality" [Source: Sage Publications]. In other words, they pay attention to heuristics or cues that really matter -- argument quality, facts provided, et cetera. Contrary to common belief, anger can now be seen as a "motivator" of analytical thinking, rather than a barrier [Source: Sage Publications].

The UCSB study shows that anger can help boost analytic thinking as angry subjects more often ignore less useful information. But why? If you think about it, there is an underlying logic. Anger is an emotion that demands a response. Sometimes that response can be harmful or violent. But sometimes it can be constructive -- in this case, a desire to find a solution by focusing on thinking analytically. And as we saw in the third test, even people who weren't analytically inclined saw a boost in their reasoning ability when they got a little peeved. The study also points out that angry people often have a desire to see someone punished, a feeling which could motivate them to rank one argument above another [Source: Sage Publications].

Other studies, some of which are cited in the Moons-Mackie study, have also found positive benefits to anger. Dr. Jennifer Lerner of Carnegie-Mellon University has studied the effects of anger extensively. She has found that responding to a stressful situation with a reasonable amount of anger can make people feel more in control and more positive. (It's worth noting that in their study, Dr. Moons and Dr. Mackie didn't see that high level of certainty among subjects.) Dr. Carol Tavris, a psychologist and author of a book called "Anger: The Misunderstood Emotion," says that anger certainly has a positive role to play in society. She cites the women's suffrage movement as an example [Source: APA].

In everyday life, we often hear people saying how small eruptions of anger, or expressing frustration when it occurs, is more healthy than bottling it up until it boils over dramatically. Expressing anger can lead to healthy discussions, moments of insight and understanding. It's also usually a better response than one of the alternatives -- fear.

For more information about anger, the brain and related topics, check out the links below.

Anger and Your Health

A small amount of anger can have positive benefits. But frequent, dramatic or even violent outbursts of anger can negatively affect your health, contributing to stress and heart disease. Anger can also lead to risky or harmful behavior.