Rage Against the Machine: Religious Anger and Political Anger 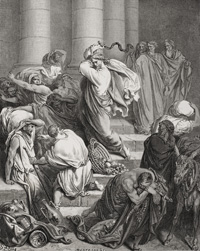 The story of Jesus in the temple, a famous story of biblical anger, appears in all four Gospels.
After Gustave Dore/The Bridgeman Art Library/Getty Images

Public anger is anger that is collectively directed toward the institutions in power. We express this kind of anger when we vote, based on what we think is wrong with the country and what needs to be done about it. Without public anger exploding over the course of U.S. history, we might still have slaves, and white men would be the only ones allowed to vote. Perhaps we wouldn't even be talking about the United States -- we'd still be colonies. Anger can be a powerful force for changing things that madden us about society.

But what of God's anger with society? In 2006, Ray Nagin, the mayor of New Orleans, garnered attention for saying that Hurricane Katrina occurred because "God is mad at America" and black communities [source: Martel]. That's but one example from history of people grappling with earthly events as signs of God's wrath; from the Black Death to the attacks of Sept. 11, many have been concerned about whether God is expressing anger.

People of all religious faiths have also struggled with scriptural evidence of whether God or other religious deities want us to express anger. Anger is roundly criticized in Buddhist texts, and the Dalai Lama once said that even in reacting to disturbing news in Tibet, he rarely feels anger, which can "poison the mind and embitter the heart" [source: Vernezze]. Sometimes the evidence can be more conflicting, with Christians trying to reconcile Jesus' anger in the temple with his command to turn the other cheek.

Some see the former as a "righteous anger," which can become troublesome when we adopt the excuse for ourselves. Much violence has been committed in God's name, and suicide bombings and wars are tragic examples of two viewpoints, both justified to believers, clashing. In 2007, a study of almost 500 college students examined the effect of violence in Scripture. Half of the students were from Brigham Young University, a religious university associated with the Church of Jesus Christ of Latter-Day Saints. The other half were from Vrije Universiteit in Amsterdam. Of the Dutch students, 50 percent said they believed in God, and 27 percent believed in the Bible, while 99 percent of the Brigham Young students believed in God and the Bible [source: Bushman et al.].

The groups were asked to read an obscure biblical passage that told of a woman's brutal killing and her husband's revenge, which involved killing everyone in several cities. Half the participants were told that the story was biblical, while the other half was told that the story was found on an ancient scroll. Half of both groups were provided an additional sentence that indicated that God commanded the husband's violence.

This study indicates that scriptural violence has an effect on believers, but the study's authors note that this was one violent episode taken out of context. If religious extremists were to focus on such passages, they might be angrier, but within the context of an entire scriptural work, believers find many examples of how to deal with anger more peacefully.