It Makes My Blood Boil! Physical Effects of Anger 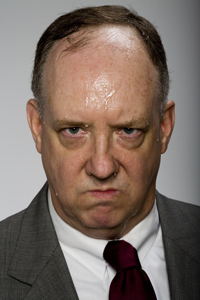 Anger is usually detectable in the face.
Cal Crary/Photodisc/Getty Images

When a cartoon character gets angry, steams comes out the ears, red creeps over the body from head to toe and there may even be an explosion or two. It's not as entertaining to watch in real life, but the state of anger causes physical effects in us as well. The response varies from person to person, but some symptoms include teeth grinding, fists clenching, flushing, paling, prickly sensations, numbness, sweating, muscle tensions and temperature changes [source: Tavris].

The feeling of anger may differ from person to person; women, for example, are more likely to describe anger slowly building through the body rate, while men describe it as a fire or a flood raging within them [source: Thomas]. Of course, it varies by what's acceptable in the culture as well: Some Asian cultures may experience anger in a milder way and for a shorter time than Caucasian Americans [source: Diong]. Either way, it's much like the fight-or-flight response; your body is gearing up for a fight to survive a wrong that's been perpetrated against you. Chemicals like adrenaline and noradrenaline surge through the body.

In the brain, the amygdala, the part of the brain that deals with emotion, is going crazy. It wants to do something, and the time between a trigger event and a response from the amygdala can be a quarter of a second [source: Ellison]. But at the same time, blood flow is increasing to the frontal lobe, specifically the part of the brain that's over the left eye. This area controls reasoning and is likely what's keeping you from hurling a vase across the room. These areas generally balance each other out quickly; according to some research, the neurological response to anger lasts less than two seconds [source: McCarthy]. This is why you get a lot of advice about counting to 10 when angry.

Many cite the example of Phineas Gage to explain the importance of the frontal lobe in controlling our rage. In 1848, Gage, a nice, dependable railroad worker suffered an accident in which a rod went through his skull, right above the left eye. From then on, Gage was angry, irritable and unstable, and not just because he'd had a rod driven through his skull. Rather, the rod had destroyed the part of his brain that could inhibit an angry response.

If you're constantly being activated by triggers, however, then this state of response can start to cause damage. Chronically angry people may not have the mechanism to turn off these effects. They may not produce acetylcholine, a hormone which tempers the more severe effects of adrenaline. Their nervous system is constantly working and can eventually become overexerted, leading to a weakened heart and stiffer arteries [source: Angier]. There's potential for liver and kidney damage, as well as high cholesterol. Anger may bring along some accompanying issues, such as depression or anxiety .

Anger's physical side effects explain why you frequently see studies about the damage that this emotion can do to our bodies. In one study of almost 13,000 subjects, individuals with the highest levels of anger had twice the risk of coronary artery disease and three times the risk of heart attack, as compared to the subjects with the lowest levels of anger [source: Kam]. Some scientists think that chronic anger may be more dangerous than smoking and obesity as a factor that will contribute to early death [source: Angier].

For some of these effects, the key is tempering the triggers that set you off, so that you're not mad at every little thing. But for some of these diseases, the key is how you're expressing your anger. On the next page, we'll look at whether letting it all hang out is a good idea.