Out of Control: Anger Management 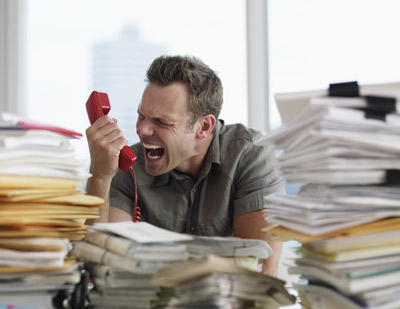 They just asked if he wanted onions on his sandwich.
LWA/Photographer's Choice/Getty Images

We all know someone who always seems to be upset with something, to the point that their entire worldview is angry. These people likely use the words "always" and "never" in describing their anger, as in, "You're always late," and "I never get promoted," which suggests that there's no solution, and thus no reason to healthily express the anger [source: APA]. Chronically angry people may have built up years of expecting to be disappointed and frustrated by events around them. These people react more angrily to even small stressful events, but in doing so, they create even more reasons to be angry. Individuals with higher anger describe higher levels of family conflict and lower levels of social support because of the effect their anger has on those around them [source: Diong].

You've also likely observed that some people are more prone to get aggressive and violent. Several things may be behind that shorter fuse, including genetics, traumatic experiences and environmental stress. It may also be societal; if your society holds that anger is bad, then you may not learn how to express anger productively. That's where anger management might help.

Anger management therapy is often court-ordered for people who show violent tendencies, such as young bullies, criminals and aggressive drivers. The work can be conducted individually or in a group and include training on identifying anger triggers, expressing anger without losing control and relaxation methods. These courses may be somewhat limited because anger is not defined by the DSM-IV, the diagnostic bible for mental health professionals, and as such, there's not a specific way to diagnose or treat someone with chronic anger. Some studies indicate that the classes have little to no effect [source: Carey]. One reason may be that many people don't realize they have a problem with anger and may not be receptive to the classes.

If you decide to pursue anger management therapy, it's important to have the right attitude and expectations. These classes do not cure you of anger, so that you're never angry again. Instead, you learn how to defuse triggers and express anger in a healthy way. Be prepared to pay: One anger management facilitator puts his usual fees at $250 per hour for one-on-one training, and about $500 per person for 10 one-hour classes with multiple participants [source: Andrews]. To find an anger management professional, you could start with the American Association of Anger Management Providers.

On the next page, we'll look at how anger through the lens of religion and politics.

Do animals get angry?

The bullfight begins and the matador waves his red cape. We expect the bull to charge because the red makes it angry. There's just one problem -- bulls are colorblind. The bull isn't getting angry at the color; it's responding to the movements of the cape and the matador.

It's easy to think that animals get angry like we do. You step on a cat's tail and it hisses, arches its back and seems to have murder in its eyes. Dogs growl and bark at mailmen. But anger requires a mental component that many scientists think that animals aren't capable of [sources: Katz, Tangley]. Anger and fear do similar things in the body, but an animal's response is more likely attributed to fear, a primary emotion. Anger is considered a secondary emotion because we use our brains to attribute blame.