I Need to Vent! Anger Expression 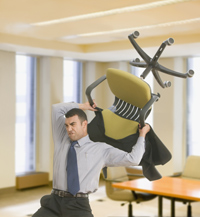 You've probably heard the phrase, "getting angry won't solve anything." This is true. Just being angry won't fix the issue that's making you angry. But the physical cues of anger alert you that something needs to be done, and the way that you express your anger could lead to solving the problem.

Goals of anger expression include:

These goals may vary in importance depending on who you're dealing with; for example, you'd probably treat a friend much differently than you'd treat a stranger.

But how do you do this? Anger expression typically takes one of three forms: anger-in, anger-out and anger control. Anger-in is turning anger inwards. This method of keeping anger inside has been described as depression [source: Tavris]. This method is overwhelmingly observed in women, who feel that society frowns upon angry women. Anger held in can leak out in unproductive, passive-aggressive ways, such as sulking or backhanded sarcasm. Anger-out is expressing anger outwardly in ways that include physical assault on people or objects and hostile verbal assault.

Sometimes you hear that you shouldn't keep anger bottled up inside you, but lashing out at everyone who makes you angry doesn't always make you feel better. Indeed, people describe feeling out of control and powerless when they practice both anger-in and anger-out methods of expressing anger [source: Thomas et al.]. Practicing anger control, or dealing with anger in an appropriate manner, is the ideal.

In studies, respondents have identified talking things over with the offender as the most appropriate way to deal with anger [source: Weber]. It's not just venting or yelling at the person; it's telling them why you're angry in a way that moves toward a solution. This method of expression is why anger can sometimes be good for us. We're moved to address a negative in our life and make it a positive. It can force us to fix problems in relationships that we want to maintain. In some cases, it might be a simple fix; the person may not have known that what they were doing was angering you.

But just because we know this is the most productive way to control our anger, that doesn't mean we do it all the time, or even that we can. It may be impossible, let's say, to track down every reckless driver for a calm conversation. When you can't do this, you have to find healthy ways to get your body to exit its angry state. These are things like exercise, meditation, watching your favorite sitcom and so on. The way you cope is going to be unique to what works for you.

It's been shown that just talking to a third party can help, as long as it's not done in a gossipy, malicious way. Calmly discussing the incident so as to gain perspective on it has been shown to lower blood pressure and lead the way to all-around better health [source: Thomas]. But as you might expect, people who are frequently angry often lack that sort of support, primarily because no one wants to be around them. So what are they supposed to do? Find out about one option on the next page.