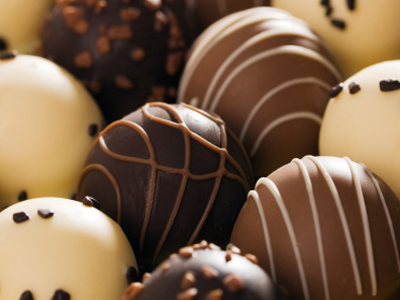 Eating chocolate is a hedonistic pursuit -- it's meant to provide pleasure and drive away pain. The look of these truffles makes us want to go for some hedonism right now.
©iStockphoto.com/YinYang

Even if the compounds found in chocolate may be too minute for some of us to get a chocolate happy high, the beloved food can still affect our happiness.

Psychologically speaking, happiness -- specifically, hedonism -- is the goal of our own self-interests. We actively pursue happiness, which is, at its core, pretty selfish. However, we can seek out our own happiness and make others happy at the same time. Charitable giving is a prime example of this: A 2007 study using functional MRI machines showed that acts of giving money to charities activate the reward center in the brain in the same way that it's activated when we receive money [source: ASRT Scanner].

The category of self-interest that encompasses our pursuit of happiness -- hedonism -- definitely includes eating chocolate. We gain feelings of pleasure, comfort and gratification from it. The act of eating chocolate is hedonistic; when we eat it, we're seeking pleasure and alleviating pain, which are the hallmarks of hedonism.

As we've seen, measuring the exact effect of chocolate on our happiness can be difficult. Most people, however, believe that such an effect exists. In fact, happiness pills that resemble pharmaceuticals made from chocolate are available for sale. What's more, one Canadian study examining the link between chocolate and happiness ended with no conclusive results because the control group that received no chocolate ended up raiding the refrigerator where the chocolate used in the study was stored [source: Chan].

While scientists have yet to discover what causes the relationship between chocolate and happiness, studies have managed to turn up correlations. One 2007 study surveyed 1,367 respondents -- all men in their 70s with similar socioeconomic backgrounds -- and asked questions about their health, satisfaction in life and emotions like happiness and loneliness. They also snuck in a question that asked what kind of candy they preferred. Those who preferred chocolate showed lower frequencies of depression and loneliness and had a more optimistic outlook on life [source: Strandberg, et al].

Even if science never quite figures out what chocolate does to our moods, does it really matter? If eating chocolate makes you happy, go for it.