The Purpose of Crying 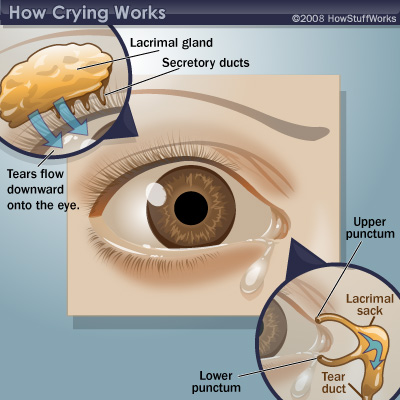 What happens when you cry, exactly? A salty fluid chock full of protein, water, mucus and oil is released from the lacrimal gland in the upper, outer region of your eye. This fluid, better known as tears, then flows down the surface of your eye, across your face and smears your mascara.

Of course, not all tears are of the emotional variety. In fact, three types of tears exist, all with different purposes. Basal tears are omnipresent in our eyes. These constant tears are what keep our eyes from drying out completely. The human body produces an average of 5 to 10 ounces of basal tears each day. They drain through the nasal cavity, which is the reason so many of us develop runny noses after a good sobfest.

The second type is reflex tears, which serve to protect the human eye from harsh irritants such as smoke, onions or even a very strong, dusty wind. To accomplish this feat, the sensory nerves in your cornea communicate this irritation to your brain stem, which in turn sends hormones to the glands in the eyelids. These hormones cause the eyes to produce tears, effectively ridding them of the irritating substance.

The third type of tears is emotional tears. It all starts in the cerebrum where sadness is registered. The endocrine system is then triggered to release hormones to the ocular area, which then causes tears to form. Emotional tears are common among people who see Bambi's mother die or who suffer personal losses.

The phrase "having a good cry" suggests that crying can actually make you feel physically and emotionally better, which many people believe. Some scientists agree with this theory, asserting that chemicals build up in the body during times of elevated stress. These researchers believe that emotional crying is the body's way of ridding itself of these toxins and waste products.

In fact, one study collected both reflex tears and emotional tears (after peeling an onion and watching a sad movie, respectively). When scientists analyzed the content of the tears, they found each type was very different. Reflex tears are generally found to be about 98 percent water, whereas several chemicals are commonly present in emotional tears [Source: The Daily Journal. First is a protein called prolactin, which is also known to control breast milk production. Adrenocorticotropic hormones are also common and indicate high stress levels. The other chemical found in emotional tears is leucine-enkephalin, an endorphin that reduces pain and works to improve mood. Of course, many scientists point out that research in this area is very limited and should be further studied before any conclusion can be made.

Incidentally, in Japan some people have taken the notion of "a good cry" to the next level. They hold organized crying clubs where they watch sad movies and television shows and read tear-inducing books.

Do Onions Really Make You Cry?

Onions aren't just associated with stinky breath -- they actually can cause the person doing the chopping to tear up. According to the Library of Congress, unstable chemicals released into the air during the chopping process cause this phenomenon. Lachrymatory-factor synthase is the enzyme to blame. When an onion is cut, the enzyme is released from the onion and converts the amino acids in the onion to sulfenic acid. The sulfenic acid then transforms into a substance called syn-ropanthethial-S-oxide, which wafts into the chef's face and irritates the lachrymal glands in his or her eyes, causing reflex tears to form. For more information visit Why do onions make you cry?