by Shanna Freeman
Prev NEXT
10

Your Brain Is Gray 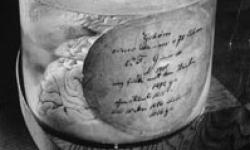 Have you given any thought to the color of your brain? Maybe not, unless you work in the medical field. We have all colors of the rainbow in our bodies in the form of blood, tissue, bone and other fluids. But you may have seen preserved brains sitting in jars in a classroom or on TV. Most of the time, those brains are a uniform white, gray or even yellowish hue. In actuality, though, the living, pulsing brain currently residing in your skull isn't just a dull, bland gray; it's also white, black and red.

Like many myths about the brain, this one has a grain of truth, because much of the brain is gray. Sometimes the entire brain is referred to as gray matter. Mystery writer Agatha Christie's famous detective Hercule Poirot often spoke of using his "little gray cells." Gray matter exists all throughout the various parts of the brain (as well as in the spinal cord); it consists of different types of cells, such as neurons. However, the brain also contains white matter, which comprises nerve fibers that connect the gray matter.

The black component is called substantia nigra, which is Latin for (you guessed it) "black substance." It's black because of neuromelanin, a specialized type of the same pigment that colors skin and hair, and it's a part of the basal ganglia. Finally, we have red -- and that's thanks to the many blood vessels in the brain. So why are preserved brains chalky looking and dull instead of spongy and colorful? It's due to the fixatives, such as formaldehyde, that keep the brain preserved.

From color, to sound -- the next myth may have you rethinking your musical choices.