The Case of Nature vs. Nurture 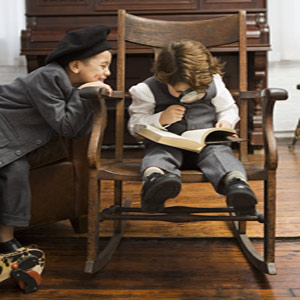 These boy detectives try to figure out how much impact their parents will have on them.
Image Source/Getty Images

Twins -- when Brad Pitt and Angelina Jolie have them, it's fascinating. When they appear to Jack Nicholson in the corridors of the Overlook Hotel in the film "The Shining," it's freaky. When Arnold Schwarzenegger and Danny DeVito claim to be them, it's comedy gold. And while multiple births represent one of the great wonders of life in their own right, they provide important clues in the mysterious case of nature versus nurture.

This case is concerned with how much of our personhood is due to what we came into the world with -- our genes. Do our genes determine how smart we'll be? Who we'll love? What we'll prefer to eat for dinner? Or does what happens once you're in the world make a bigger difference? Will parents or peers or pop stars ultimately shape the person you become? One way for researchers to figure out where genes end and where environment begins is in the study of identical twins, who share the same genes. Scientists have been studying twins to figure out the impact of genes on everything from math ability to predisposition for breast cancer. Twins represent such a rich research minefield for neuroscientists that an annual festival in Twinsburg, Ohio serves as a recruitment party of sorts [source: Revill, Asthana].

The separation of twins is when scientists may be able to really examine nature versus nurture. So far, however, only one study has ever looked at separated twins from infancy through adulthood, and we won't know the results of that study until 2066. In the 1960s, 1970s and 1980s, child psychiatrist Peter Neubauer and child psychologist Viola Bernard led a study in which twins and triplets that were given up for adoption at a certain New York adoption agency were separated and studied throughout the duration of their lives [source: Wright].

When the siblings were placed with their respective families, the parents were told that the child was part of an ongoing research study that would require regular interviews and evaluations. No one, however, was told that the child was a twin or triplet, or that the study involved the influence of nature versus nurture. In 1981, the state of New York began requiring that siblings be kept together in the adoption process, and Neubauer realized that the public might not be receptive to a study that used this separation method [source: Richman]. The results were sealed and placed at Yale University until 2066.

The memoir "Identical Strangers" is the story of Paula Bernstein and Elyse Schein, who were a part of the study. The sisters were reunited when they were both 35 years old; all but four subjects of the 13-child study have found their missing sibling [source: Richman]. In promoting the book, Bernstein and Schein may provide a sneak peek at Neubauer and Bernard's results. Bernstein and Schein say it's undeniable that genetics play a major role; Bernstein puts the number at more than 50 percent [source: Sunday Herald Sun]. The women discovered they had things in common that included a habit of sucking on the same fingers and the same major in college [source: Sunday Herald Sun]. As for other matters, the women report that they are, as Bernstein put it in an interview with National Public Radio, "different people with different life histories" [source: Richman].

For now, it seems we're at a stalemate, so go to the next page to see if we can solve "The Puzzle of Why the Brain Stops Working."