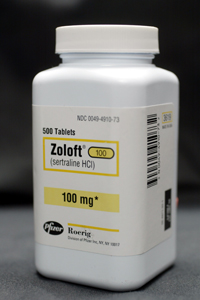 Zoloft is classified as a Selective Serotonin Reuptake Inhibitor. This class of antidepressants affects receptors in the brain that absorb the neurotransmitter serotonin.
Joe Raedle/Getty Images

For a small amber or blue oval pill, Zoloft sure generates a lot of buzz -- and so do other members of its family of antidepressants.

A study released in 2011 by the National Center for Health Statistics reports that from 2005 to 2008, one in 10 Americans age 12 and older took antidepressant medication, making antidepressants the third most commonly prescribed drug taken by Americans of all ages during and the No. 1 medication of adults age 18 to 44. Overall, the rate of antidepressant usage in the U.S. -- among all ages -- skyrocketed 400 percent between 1988 and 2008 [source: NCHS].

Zoloft -- also known by its generic name sertraline hydrochloride -- is a prescription antidepressant classified as a selective serotonin reuptake inhibitor (SSRI), as we mentioned. This class of antidepressants affects receptors in the brain that absorb serotonin.

Serotonin -- 5-Hydroxytryptamine or 5-HT -- is a naturally occurring chemical found in intestines, blood platelets, certain cells and the brain. Serotonin is a derivative of tryptophan, a natural amino acid, and is concentrated in the midbrain and hypothalamus -- two areas responsible for mood, sleep and aggression. When there isn't enough serotonin, either because it is absorbed too quickly or in too great a quantity by the brain's neurons, depression can occur.

An SSRI antidepressant like Zoloft acts as an air traffic controller in the brain. It commands serotonin to circle the runway before landing, causing a critical delay that allows the brain's neurons to more effectively absorb the optimal amount of mood-boosting serotonin. The air traffic controller opens more runways, in this case receptors in the brain, so more serotonin can reach its intended destination. And, because (as its name suggests) an SSRI is "selective," it targets only serotonin and allows other chemicals to continue their normal flight pattern in the brain. In effect, it inhibits the reabsorption or reuptake of serotonin from happening too quickly [source: Bussing, Crowe].

The first generation of antidepressants in the 1950s boosted the levels of several brain neurotransmitters or chemicals. Later scientists concentrated on drugs that could improve the uptake of just one chemical. In 1987, the first SSRI -- Prozac -- was approved by the FDA, followed by fluvoxamine maleate (Luvox), paroxetine (Paxil), Zoloft and, in 1998, citalopram (Celexa) [source: Bussing].

The newest class of antidepressants is serotonin norepinephrine reuptake inhibitors (SNRIs), called dual-action antidepressants because they increase levels of serotonin and norepinephrine (both neurotransmitters). This class includes duloxetine (Cymbalta), venlafaxine (Effexor) and desvenlafaxine (Pristiq). For some people, this combination works better than an SSRI [source: Medicine Net].