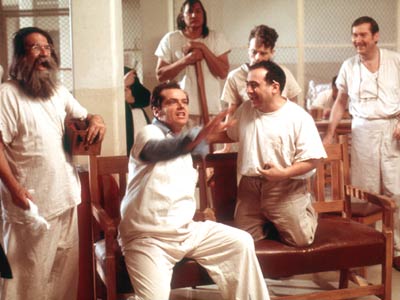 The lobotomization of McMurphy (center, played by Jack Nicholson in the 1975 film) and others in "One Flew Over the Cuckoo's Nest" has long influenced how the procedure was perceived in mainstream culture. See more mental disorder pictures.
Michael Ochs Archives/Getty Images

It's evening in a mental hospital in Oregon, and there's a struggle happening between a noncompliant patient and the head nurse. The violent patient, however, isn't actually mentally ill; he's a convict named McMurphy who faked insanity so he could finish his sentence in a mental hospital instead of a prison. He's caused a lot of problems in the hospital by encouraging the other patients to stand up to the head nurse's abuses. McMurphy eventually attempts to strangle her because she's partly responsible for the death of another patient.

Because of the violent patient's actions, the head nurse has him committed to a special ward for patients deemed "disturbed." He also undergoes a lobotomy -- an operation in which the connections between the frontal lobes and rest of the brain are severed. The procedure leaves him in a vegetative state. Upon his return to the ward, another patient, Chief, remarks that "There's nothin' in the face. Just like one of those store dummies."

This scene, from the novel "One Flew Over the Cuckoo's Nest" and the subsequent film, was the first time that many people ever heard of a lobotomy. For some, it's still the first thing that comes to mind: an operation on the brain that makes a violent, noncompliant patient calm or even completely unresponsive. In the late 1950s, when Ken Kesey wrote his book, lobotomies were used to treat many different types of mental illnesses, including anxiety, depression and schizophrenia. The procedure was also performed on people who were considered extremely emotional, difficult to handle or simply "moody."

­With the wide range of drugs and other types of therapies available to treat severe mental illness today, it's hard to imagine that doctors once thought that such a drastic operation was the way to a cure. As you'll read in this article, it wasn't always much of a cure. Let's start by looking at exactly what goes into performing a lobotomy.