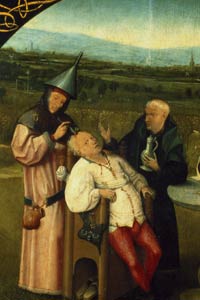 This detail from Hieronymous Bosch's "The Cure of Folly" references a type of psychosurgery done in his day: trepanning.
Hieronymous Bosch/Bridgeman Art Library/Getty Images

In 1950, a drug named chlorpromazine (sold as Thorazine)­ was synthesized. This marked the beginning of the end for lobotomies as treatment for mental illness in the United States. Thorazine was the first in a series of antipsychotic drugs, and some have described it as the biggest single advance in the treatment of schizophrenia -- on par with what the discovery of penicillin did for the treatment of infectious diseases.

Criticism of lobotomies had always existed, but concern grew along with its popularity. An editorial in a 1941 issue of the Journal of the American Medical Association read, "No doctor can yet assert that this is or is not a truly worthwhile procedure. The ultimate decision must await the production of more scientific evidence." [source: Diefenbach]. Still, the Nobel Committee selected Dr. Moniz, nominated by Dr. Freeman, for the Nobel Prize in Physiology or Medicine in 1949. However, while popular publications contained stories of Freeman's surgical precision and patients' miraculous recovery, the medical and scientific community discussed the crude nature of the operation and wondered if it could be truly proven as effective.

Eventually this negativity spread to the general press. After the USSR banned lobotomies in 1953, a New York Times article quoted Soviet psychiatrist Dr. Nicolai Oseresky as saying that lobotomies "violate the principles of humanity" and change "an insane person" into "an idiot" during a meeting of the World Federation of Mental Health [source: Laurence]. The article also stated that leading European and American psychiatrists in attendance were inclined to agree. There was never an established scientific basis for lobotomies, and most psychiatrists didn't perform long-term follow-up care for their patients in order to assess its effectiveness.

Some criticism had to do with the relaxed criteria for lobotomies. They were given to criminals, in some cases against their will, in an attempt to "cure" them of their desire to commit crimes. Some battle-fatigued World War II veterans were lobotomized so they could free up space in the hospitals. When patients couldn't consent to the operation themselves, their family members did so, but sometimes the family member was more interested in getting rid of their problem than actually helping the patient. As more stories of abuse and disastrous results became public and antipsychotic drugs got widespread use, lobotomies were all but forgotten.

Freeman continued to perform lobotomies until 1967, when he was banned from operating after last patient (on her third lobotomy -- Dr. Freeman believed in trying until he got it right) died from a brain hemorrhage. He continued to visit his former patients and tout the success of the lobotomy until he died of cancer in 1972.

Although the lobotomy has been banned in several countries (including Moniz's home country of Portugal), it's still performed in limited numbers in several countries today. Often it's used to treat epilepsy. Now known as NMD (neurosurgery for mental disorder), lobotomies are performed in two hospitals in Great Britain as a last resort to treat obsessive-compulsive disorder and severe depression. Those who support it still believe it can be beneficial when all other treatments have failed.

Some doctors in the United States are interested in reviving psychosurgery -- or psychiatric surgery, as some prefer to call it. In 1997, a team of neurosurgeons at Harvard published a report about using MRI to guide doctors in performing cingulotomies to treat mental illness. A cingulotomy involves burning small holes in the cingulate gyrus, an area of the brain though to connect the frontal lobes to the limbic region, involved in emotional behavior. Although there's some evidence that this can work, neurosurgeon Dr. Frank Vertosek points out the public relations problems inherent in any kind of psychosurgery. He also states that most mentally ill patients will respond well to drugs and other therapies, leaving few candidates for surgery even if it did become more widely acceptable.

If you're interested in reading more articles about the brain, from its evolution to why men's and women's brains are different, try the links below.