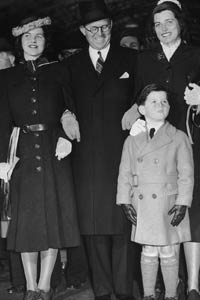 In the United States, about 50,000 patients were lobotomized, most of them between 1949 and 1956. Dr. Freeman himself performed between 3,500 and 5,000 of them. He called lobotomies "soul surgery" and claimed that they could be used to treat not only schizophrenia, but depression, chronic pain and other mental and physical conditions. Freeman, and other doctors who performed lobotomies, believed that they could relieve suffering. In some cases, they did.

Freeman first performed his transorbital lobotomy on Ellen Ionesco in 1946. She was described as "violently suicidal" by Angelene Forester, her daughter. After Ionesco's lobotomy, Forester says that "it was just peace [...] it was like turning a coin over. That quick. So whatever he did, he did something right" [source: NPR]. Patricia Moen, who was also suicidal, was lobotomized by Freeman in 1962. Afterward, Moen said that she "just started living again." Her husband Glenn was "delighted at the way it turned out."

Not all patients were so happy with life after their lobotomies. Howard Dully was lobotomized by Freeman as a 12-year-old boy in 1960. He wasn't mentally ill; his stepmother wanted to change his personality, which she described as defiant. Dully wasn't told about the operation until afterward. He states that "the surgery damaged me in many ways. But it didn't 'fix' me, or turn me into a robot. So my family put me into an institution" [source: Dully]. Dully claims that he always felt different, like "a freak" and "ashamed." He lived in institutions for 10 years and battled addictions until his 50s.

One of Freeman's most famous failures was the sister of a president. In 1941, Rosemary Kennedy, the sister of John F. Kennedy, was lobotomized at the age of 23. Rosemary was described as a shy and easygoing child, but in her teenage years, she became rebellious and moody. A doctor suggested that a lobotomy could calm Rosemary down. At the time, Freeman had only performed about 60 lobotomies and hadn't yet created his transorbital technique, so he performed a prefrontal lobotomy.

The operation did make Rosemary more manageable, because she was essentially left with the mental capacity of an infant. She couldn't speak intelligibly or control some bodily functions, and she stared into space for hours. Rosemary spent the rest of her life in an institution. Some researchers have claimed that she was mildly mentally disabled before her lobotomy, while others say that she had some form of mental illness. Publicly, Rosemary was described as mentally disabled. Her sister Eunice Kennedy Shriver later helped to found the Special Olympics in her honor.

Other lobotomy patients also experienced negative results. Anita McGee was lobotomized by Freeman in 1953 for postpartum depression. Her daughter Rebecca Welch describes her mother as "there but not there" [source: NPR]. McGee has spent the rest of her life in institutions. Beulah Jones was lobotomized in the late 1940s due to schizophrenia. Her daughter Janice-Jones Thomson stated that afterward, "there was no change in her behavior other than she lost her higher intellect. She could not sit down and read anymore. She could barely write. She had no long-term memory" [source: PBS].

Neurologist Dr. Elliot S. Valenstein has said of lobotomies, "There were some very unpleasant results, very tragic results and some excellent results and a lot in between" [source: Valenstein]. Ironically, the procedure couldn't cure schizophrenics. According to neurosurgeon Dr. Frank Vertosick, "Unlike depression and mania, which are disorders of mood, schizophrenia is a disorder of thought. And what a lobotomy alters is emotional state, not cognitive abilities" [source: Vertosick].

If the results varied so much, then why did lobotomies become the way to treat mental illness? The answer lies in the state of psychiatric care during the time that the lobotomy was popularized.