Psychiatric Care in the 1930s: The Lobotomy's Origins 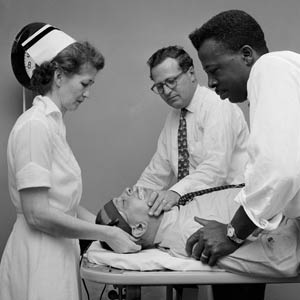 Although it had come a long way from the days of simply restraining and locking away the mentally ill, psychiatric care in the 1930s was still very limited. There was essentially no treatment for schizophrenic patients, for example. Psychiatrists attempted to treat their symptoms by prescribing drugs like sedatives, which suppressed the patient's nervous system, and trying a number of different mind-body therapies.

Schizophrenics received hydrotherapy in the form of hot or cold baths for hours at a time. There were also a few different types of shock therapy: insulin, Metrazol and electroconvulsive therapy (ECT). All of these therapies induced seizures in patients. Many psychiatrists claimed that these therapies worked by "shocking" patients out of their illness. Others believed that there was a connection between epilepsy and schizophrenia -- a patient who had the former, even if it was induced, couldn't have the latter.

These treatments didn't generally cure schizophrenics, depressives and others of their mental illness; most were in and out of hospitals or ultimately spent their entire lives inside them. In addition, hospitals in the United States were overcrowded -- by 1940, there were around 1 million patients and the population was growing by 80 percent per year [source: Dully]. Conditions were also deteriorating due to a lack of funding during the Great Depression. Public hospitals were understaffed and patients were often left without any kind of treatment. People embraced the idea of a speedy, simple cure and were hopeful that surgery could provide it.

In 1933, two neurologists at Yale Primate Laboratory, Dr. John Fulton and Dr. Carlyle Jacobson, performed experiments on two monkeys named Becky and Lucy. After testing the monkeys' intelligence, the doctors removed half of their brains' frontal lobes and then retested them. They seemed to retain their skills and intelligence. Fulton and Carlyle then removed the other half of the monkeys' frontal lobes. Becky's and Lucy's personalities changed -- they no longer became violent and frustrated when they didn't immediately get their treats after completing a test. The monkeys could still complete the tests, although not quite as well.

Dr. Moniz saw Fulton present his work at a conference in 1935. He saw similarities between the monkeys' behavior prior to their surgery and the behavior of his mentally ill patients. Moniz concluded that he could perform a slightly different operation on people to separate their emotions and thoughts while retaining their intelligence. He and his colleague Dr. Lima performed numerous experiments on cadaver brains before attempting a lobotomy on a live patient. After perfecting his technique, Moniz claimed success -- his lobotomized patients were serene and no longer anxious.

The following year, Moniz shared his findings in medical journals and at conferences, to a mixed reception. Some psychiatrists were very upset at the idea that a surgery that destroyed healthy brain tissue could cure mental illness. Accepting psychosurgery also meant acknowledging that other forms of therapy, such as the growing field of psychoanalysis, may not work.

Still, many psychiatrists and neurologists were intrigued, Dr. Walter Freeman among them. His championing of the surgery eventually included a traveling "lobotomobile," a customized van in which he demonstrated his technique to the press as well as doctors at mental hospitals. He liked to show off by entering both eye sockets at one time with two different orbitoclasts. Critics likened Freeman to an evangelist for the cause, while supporters claimed that getting a lobotomy was as safe and easy as getting a filling at the dentist. When Howard Dully received the records of the lobotomy performed on him as a child, he discovered that it had cost his parents less than $200. Lobotomies cleared overcrowded hospitals, and unlike other psychiatric care, it promised immediate results.

However, the so-called "lobotomy revolution" lasted less than 20 years. Next, we'll look at how it fell out of favor and what's happening with psychosurgery today.