How do we measure pain? 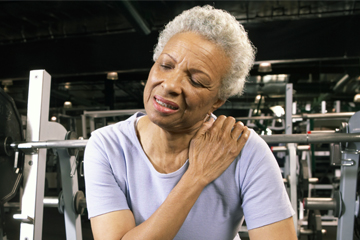 It's sometimes hard to explain just how much pain you're feeling. Advances in medical technology may make pain assessment more accurate in the future.
Barry Austin/Thinkstock

Anyone who has ever experienced pain — which is pretty much all of us — knows that suffering exists on a scale. There's annoying pain, like a paper cut, and then there's intense pain, like passing a kidney stone or giving birth. But within that range, things tend to get murky. How much pain are you really experiencing? Does it require narcotic painkillers or just a Tylenol? Will the pain go away in an hour or persist for months?

Pain is highly subjective and can vary greatly from person to person. Both women are more sensitive to it, as are redheads, people who are depressed, ill or nonathletic [source: Woznicki]. And a myriad of quirks influence pain. For instance, most people are better able to tolerate pain on the dominant side of their bodies (right, if you're right-handed; left if you're left-handed) [source: Woznicki].

There are also different kinds of pain. Tissue pain, such as muscle damage, can cause a dull, aching feeling, whereas nerve-related pain often creates a burning, shooting sensation. And any type of pain can be acute (sudden and short-lived) or chronic (ongoing).

With such varied occurrences, it's no wonder pain can be a challenging thing for people to describe — and for doctors to measure. Because of this, researchers have spent decades trying to come up with reliable ways to measure it. In the 1940s, medical scientists created a unit of measurement called the "dol," which gauged a patient's reaction to having a point on his or her hand burned. (Incidentally, dol research was mainly conducted on a category of patient undergoing an intense amount of pain — women in labor.)

The dol concept was eventually applied through a device called a dolorimeter. This mechanism would apply stimulation or heat to a patient's skin and measure his or her response. A more modern version, known as a palpometer, follows the same model, but with applied pressure. Such devices are still in use but haven't yet been widely accepted as reliable tools for pain measurement.

Of course, the current, most popular, way to gauge pain is through patient self-reporting. Hospitals and physician offices use a pain identification chart to help people assess their pain on a scale of one to 10. When a person is unable to verbally describe their pain due to a medical condition or language barrier, medical providers rely on a chart that matches pain level to facial expressions.

For obvious reasons, self-reporting of pain lacks reliability. Not only can pain be subjective, it can also be difficult to describe. Some people, due to cultural or social inhibitions, may express their pain poorly -- even to the point of downplaying it.

Fortunately, advances in medical technology may make pain assessment more accurate in the future. In 2013, researchers at The University of Colorado-Boulder were able to map pain using brain scans. In evaluating research subjects' brain responses to different levels of heat, the researchers noticed the images displayed distinct neurologic signatures for different pain responses. Such clear-cut results allowed them to identify pain levels on an objective basis for, perhaps, the first time in human history.

Of course, the use of imaging in everyday pain measurement is still a long way off, but it has led to a better understanding of how the human brain reacts to pain, opening the door for further investigation and application.

Can a Vision Board Really Affect Your Future?
No, a Second Bump on the Head Won't Cure Amnesia
Military Hopes Zapping Brains Leads to Faster Language Learning