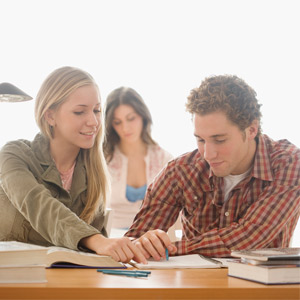 Their brains may be different, but they'll likely reach the same conclusion.
Jamie Grill/IGetty Images

Scientists have known for a while now that men and women have slightly different brains, but they thought the changes were limited to the hypothalamus, the part of the brain that controls sex drive and food intake. A few scientists may have admitted that men's brains were indeed bigger, but they would have tried to qualify this finding by telling you that it was because men were bigger. Because brain size has been linked with intelligence, it's very tricky to go around saying that men have bigger brains. Yet men do seem to have women beat here; even when accounting for height and weight differences, men have slightly bigger brains. Does this mean they're smarter? Let's keep going.

In 2001, researchers from Harvard found that certain parts of the brain were differently sized in males and females, which may help balance out the overall size difference. The study found that parts of the frontal lobe, responsible for problem-solving and decision-making, and the limbic cortex, responsible for regulating emotions, were larger in women [source: Hoag]. In men, the parietal cortex, which is involved in space perception, and the amygdala, which regulates sexual and social behavior, were larger [source: Hoag].

Men also have approximately 6.5 times more gray matter in the brain than women, but before the heads of all the men out there start to swell, listen to this: Women have about 10 times more white matter than men do [source: Carey]. This difference may account for differences in how men and women think. Men seem to think with their gray matter, which is full of active neurons. Women think with the white matter, which consists more of connections between the neurons. In this way, a woman's brain is a bit more complicated in setup, but those connections may allow a woman's brain to work faster than a man's [source: Hotz].

If you're a lady still concerned about the size issues brought up in the first paragraph, let's address that now. In women's brains, the neurons are packed in tightly, so that they're closer together. This proximity, in conjunction with speedy connections facilitated by the white matter, is another reason why women's brains work faster. Some women even have as many as 12 percent more neurons than men do [source: Hotz]. In studying women's brains, psychologist Sandra Witelson found that those neurons were most densely crowded on certain layers of the cortex, namely the ones responsible for signals coming in and out of the brain. This, Witelson believed, may be one reason why women tend to score higher on tests that involve language and communication, and she came to believe that these differences were present from birth [source: Hotz].

But the density of women's neurons, much like the size of a guy's brain, isn't any sort of magic bullet for predicting intelligence. Scientists know this because they've conducted imaging studies on how men and women think. As we've said, men use gray matter, and women use white, but they're also accessing different sections of the brain for the same task. In one study, men and women were asked to sound out different words. Men relied on just one small area on the left side of the brain to complete the task, while the majority of women used areas in both sides of the brain [source: Kolata]. However, both men and women sounded out the words equally well, indicating that there is more than one way for the brain to arrive at the same result. For example, while women get stuck with a bad reputation for reading maps, it may just be that they orient to landmarks differently. And as for intelligence, average IQ scores are the same for both men and women [source: Crenson].

But do we get to these IQ scores through nature or nurture? On the next page, we'll examine whether these different brain structures are set at birth, or whether they're shaped by the environment.