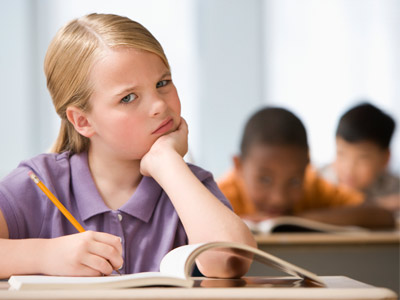 A girl may get uncomfortable if she's the only one in math class.
Jose Luis Pelaez/Getty Images

There may be subtle differences in how even the most equality-minded among us treat baby girls versus baby boys. Girls may be dressed in pink and given dolls, while boys wear blue jumpers and push around trucks. To some people, these environmental factors are impossible to ignore when considering the human brain. If there are differences in people's brains, it might be due to how society has shaped a person, with neurons and synapses pruned away as the brain deemed them unnecessary.

Sandra Witelson, the psychologist mentioned on the previous page, disagrees with that environmental assessment, and she uses an unlikely source to support her belief that our brains are structured at birth: Albert Einstein. Witelson had the opportunity to study pieces of Einstein's brain, and she found its unique structure to be a sort of confirmation that some brain differences simply can't be explained away with social or environmental reasons [source: Hotz]. She didn't look at Einstein's intelligence or accomplishments, but she simply observed that he had a unique brain structure that was likely already formed at birth.

This may help to explain why we don't have many Einsteins running around. And when it comes to the stereotype of women underperforming at Einstein's favored subjects of physics and math, that may just come down to slight differences in the brain as well. It may be that girls' and boys' brains develop at different rates. Our educational system, however, doesn't take that into account. When a child encounters a subject that his or her brain is not ready to tackle yet, the child may become frustrated and give up too quickly [source: Ripley].

To tease this out a bit further, girls may start to discern that boys do better in math classes, and that girls in their peer groups are electing not to take more advanced versions of the subjects. This can cause further drops in female enrollment in math and physics courses: One study showed that female students with math, science and engineering majors were uninterested in attending a summer math and sciences conference after they were shown videos in which the gender ratio was unbalanced, with three males for every one female [source: Bryner].

However, another study demonstrated that this sort of insecurity is all in our heads. In that study, girls' math scores improved when they were told that the exam was gender-neutral, while white men's scores on the same test dropped when they were told the scores would be evaluated against Asian men's scores [source: Crenson]. This seems to suggest that we can easily overcome any biological differences, or we can just as easily doom ourselves to fulfilling these prophecies.

But at this point, instead of wondering whether we need to revamp the educational system or worry about whether a different brain could become grounds for not hiring someone, it may be more important to focus on how knowing about these differences could help us. Most research for new medications is conducted on male volunteers and male animals exclusively, because it was believed that the female brain would show wildly erratic results during various phases of the menstrual cycle [source: Hoag]. Knowing about the differences in male and female brains could open up tremendous opportunity in diagnosing and treating brain disorders.

For example, depression and chronic anxiety are diagnosed far more often in women; this may have to do with differences in the chemical composition of the brain, as one study has shown that women produce only about half as much serotonin (a neurotransmitter linked to depression) as men and have fewer transporters to recycle it [source: Karolinska Institutet]. Or, it may have to do with how the various sides of the female brain respond to emotions and pain. Men, on the other hand, are more likely to be diagnosed with autism, Tourette's syndrome, dyslexia and schizophrenia, to name a few [source: Hoag]. Additionally, disorders like schizophrenia and Alzheimer's disease can show up differently in men and women [source: Society for Women's Health Research]. Based on the location of neurons, brain injuries may affect men and women differently [source: Carey].

This sort of knowledge could affect drug treatments, or at least explain why some drugs work differently in men and women. It extends beyond just drugs, though. One study has found that men and women's brains fire differently when they do plan a visually guided action, like reaching for an object. This may necessitate changes in physical therapy after a brain disorder that affects one side of the brain, like a stroke [source: York University].

Scientists have more work to do in learning about the human brain. If you'd like to learn more about the brain, gender and related topics, visit the links below.