Browse the article How Pain Works

Nerves send pain signals to the brain for processing and action.

What happens when you're cutting a bagel and slice your hand with the knife? Besides all the blood, you'll probably feel an immediate sharp pain, followed by a longer-lasting dull ache. Eventually, both pains will go away. But what actually is pain? How do you sense it? What makes it go away? In this article, we'll examine the neurobiology of pain, the various types of pain and how pain can be treated or managed.

Obviously, this definition is pretty vague. One physician even remarked that pain is whatever the patient says it is. So let's just say that pain is a warning sensation to your brain that some type of stimulus is causing or may cause damage, and you should probably do something about it.

Pain perception, or nociception (from the Latin word for "hurt"), is the process by which a painful stimulus is relayed from the site of stimulation to the central nervous system. There are several steps in the nociception process:

Next, we'll look at your body's nociception pathways.

Like normal sensory neurons, nociceptor neurons travel in peripheral sensory nerves. Their cell bodies lie in the dorsal root ganglia of peripheral nerves just inside the spine. As we mentioned, nociceptors sense pain through free nerve endings rather than specialized endings such as those in neurons that sense touch or pressure. However, while normal sensory neurons are myelinated (insulated) and conduct quickly, nociceptor neurons are lightly or non-myelinated and slower. We can divide nociceptors into three classes:

Suppose you cut your hand. Several factors contribute to the reception of pain:

These substances cause action potentials in the nociceptor neurons.

The first thing you may feel when you cut your hand is an intense pain at the moment of the injury. The signal for this pain is conducted rapidly by the A δ-type nociceptors. The pain is followed by a slower, prolonged, dull ache, which is conducted by the slower C-fibers. Using chemical anesthetics, scientists can block one type of neuron and separate the two types of pain.

The signals from your cut hand travel into the spinal cord through the dorsal roots. There, they make synapses on neurons within the dorsal horn (the top half of the butterfly-shaped gray matter). They synapse on neurons within the spinal cord segment that they entered and also on neurons one to two segments above and below their segment of entry. These multiple connections relate to a broad area of the body -- this explains why it's sometimes difficult to determine the exact location of pain, especially internal pain.

Nerves from the thalamus then relay the signal to various areas of the brain's somatosensory cortex -- there is no single pain center in the brain.

Pain signals travel along pathways through the body. On the next page we'll learn about them.

Pain Information from the Face

Your face has its own mini spinal-cord system called the trigeminal nerve. Somatosensory neurons (and pain receptors all over the face and head) travel into the central nervous system through the trigeminal nerve. They synapse in the trigeminal nucleus (group of neurons) in the mid-medulla and also on neurons in the lower medulla. Then these neurons send signals through the tregeminal-thalamic tract within the midbrain to the thalamus. Neurons in the thalamus relay signals to the somatosensory cortex and limbic system.

Once the pain information is in the brain, we're not quite sure how it gets processed. Obviously, some signals go to the motor cortex, then down through the spinal cord and to the motor nerves. These impulses would cause muscle contractions to move your hand out of the way of whatever is causing the pain.

However, several observations lead scientists to think that the brain can influence pain perception.

This indicates that pain-influencing neural pathways must exist from the brain downward.

These descending pathways originate in the somatosensory cortex (which relays to the thalamus) and the hypothalamus. Thalamic neurons descend to the midbrain. There, they synapse on ascending pathways in the medulla and spinal cord and inhibit ascending nerve signals. This produces pain relief (analgesia). Some of this relief comes from the stimulation of natural pain-relieving opiate neurotransmitters called endorphins, dynorphins and enkephalins.

Pain signals can set off autonomic nervous system pathways as they pass through the medulla, causing increased heart rate and blood pressure, rapid breathing and sweating. The extent of these reactions depends upon the intensity of pain, and they can be depressed by brain centers in the cortex through various descending pathways.

As the ascending pain pathways travel through the spinal cord and medulla, they can also be set off by neuropathic pain -- damage to peripheral nerves, spinal cord or the brain itself. However, the extent of the damage may limit the reaction of the brain's descending pathways.

The influences of the descending pathways might also be responsible for psychogenic pain (pain perception with no obvious physical cause).

Thoughts, emotions and "circuitry" can affect both ascending and descending pain pathways. So, several factors, physiological and psychological, can influence pain perception:

Physicians and neuroscientists generally classify pain in the following ways:

To explain why thoughts and emotions influence pain perception, Ronald Melzack and Patrick Wall proposed that a gating mechanism exists within the dorsal horn of the spinal cord. Small nerve fibers (pain receptors) and large nerve fibers ("normal" receptors) synapse on projection cells (P), which go up the spinothalamic tract to the brain, and inhibitory interneurons (I) within the dorsal horn.

The interplay among these connections determines when painful stimuli go to the brain:

Descending pathways from the brain close the gate by inhibiting the projector neurons and diminishing pain perception.

This theory doesn't tell us everything about pain perception, but it does explain some things. If you rub or shake your hand after you bang your finger, you stimulate normal somatosensory input to the projector neurons. This closes the gate and reduces the perception of pain.

Congenital analgesia is a rare genetic disorder where the individual is unable to feel pain. You might think this sounds like a good thing, but it's actually a life-threatening condition. Pain serves as a warning against injury, so people who don't feel it can be severly injured hurt by things that most of us would react quickly to. For example, Ronald Melzack and Patrick Wall describe a girl who got third-degree burns on her knees by climbing on a hot radiator. There was no signal for her to stop. Researchers are trying to reproduce this condition by genetically altering mice so that they can study the genetic contributions to pain perception. 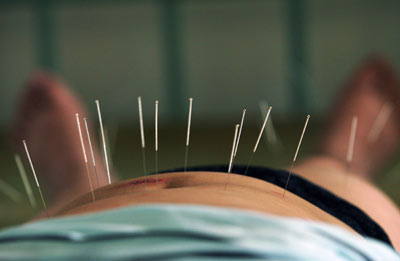 Physicians treat pain in numerous ways. Pain management can include medications, surgery, alternative procedures (like hypnosis, acupuncture, massage therapy and biofeedback) or combinations of these approaches.

Different types of pain medications act at different places in the pain pathways. The type of medication depends upon the source of the pain, the level of discomfort and possible side effects.

In extreme cases, surgeons may have to sever pain pathways by altering areas of the brain associated with pain perception -- or performing a rhizotomy (which destroys portions of peripheral nerves) or a chordotomy (destroys ascending tracts in the spinal cord). These surgeries are usually a last resort.

Surgical interventions can be aimed at eradicating the source of the pain. For example, many people suffer back pain from herniated disks between the vertebrae. An inflamed disc can compress a nerve and cause neuropathic pain. If the patient does not respond to medication, a surgeon might try to remove at least part of the disc and relieve pressure on the nerve.

These approaches do not involve drugs or surgery.

Pain-management plans involve the participation of doctors, patients, family members and other caregivers. As with any medical treatment, the source ofpain, pain tolerance, and the potential benefits and risks of treatmen must be considered.

To learn more about pain, take a look at the links on the next page.

There is no absolute measurement of the degree of pain. As we said in the beginning, pain is subjective. Numerical rating scales ask patients to judge their pain intensity on a scale from zero (no pain at all) to 10 (unimaginable pain). Doctors often use picture scales with children -- they show faces with varying degrees of pain expressions. Physicians also consider a patient's history of pain in their assessment.