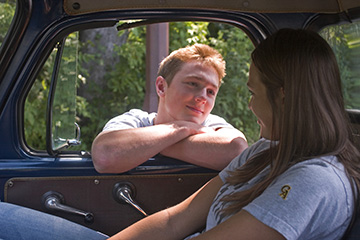 Sometimes couples will try to get each other to do things by asking them to do the opposite. That's reverse psychology.
Layne Kennedy/Fuse/Thinkstock

You've probably done it innumerable times. And you might not even be aware that you're doing it. "It" is reverse psychology. Reverse psychology is a simple concept. You want someone to do something, but are pretty sure they won't do it even if you ask nicely. So you try to trick the person into it by asking or telling them to do the exact opposite of what you really want them to do. An example: You're trying to get your hubby to paint your bedroom without success. So you tell him, "Never mind, I'll do the bedroom — I'm a better painter anyway." The next thing you know, he's got a paintbrush in hand.

Many people associate reverse psychology with kids. What parent hasn't, say, told a purple-haired teen that the color really works on him, in hopes that he'll immediately dye it his original color? But people of all ages are susceptible to its effects.

Reverse psychology often works because humans have a need for independence, says Dr. Jeanette Raymond, a Los Angeles-based licensed psychologist, therapist and relationship expert. "It's more empowering to think that you did something out of your own free will than because you were forced, threatened, shamed into it or are afraid of losing that relationship."

In the psychotherapeutic field, reverse psychology is more accurately termed a paradoxical intervention. (The term "reverse psychology" is a media invention, Raymond says.) In a paradoxical intervention, a therapist tells a client to engage in a behavior the client is trying to resolve. So if a patient is trying to stop being a procrastinator, his counselor might tell him to spend one hour per day procrastinating. The idea is that this will help the client focus on the behavior and its possible causes, and allow him to see that the behavior is voluntary and therefore can be controlled.

There are some concerns over whether paradoxical interventions by a professional are ethical. Sometimes a patient's problem involves a fear or pain, so asking the patient to try to create the fear or pain isn't always deemed appropriate [source: Howes].