Test Case: Medical Marijuana in California -- and the FDA's Opinion 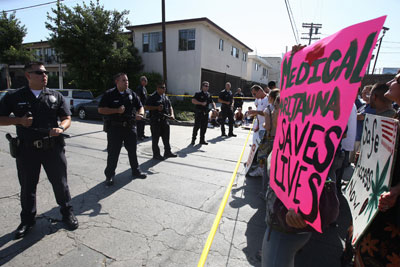 ­If the medical marijuana movement has a capital, then it's in California. In America's most populous state, where medical marijuana was made legal in 1996 by Proposition 215, an entire industry has sprouted up around medical marijuana. There, patients can grow, possess and use marijuana for medical purposes -- after a doctor's recommendation. A patient's primary caregiver may also provide marijuana, though many patients turn to marijuana dispensaries.

A 2003 bill updated the law. Now a patient with a note from his or her doctor can grow up to six plants or possess no more than half an ounce of marijuana. But individual counties can also set their own regulations, causing some, like Humboldt County, to relax their standards further. Because of these relatively liberal regulations, numerous medical marijuana dispensaries or co-ops operate throughout the state and in accordance with state law. However, growers, dispensaries and other middlemen often come into conflict with the federal government and federal law enforcement agencies, who conduct periodic raids on larger suppliers. Even so, the federal government almost never arrests actual patients for using medical marijuana.

Many Americans and states share California's opinion that marijuana can be a regulated, monitored drug, medically beneficial when recommended by a physician. But what does the federal government think? Under the Controlled Substances Act, marijuana is a Schedule I drug, the strictest classification. To give you an idea of what that means, heroin, LSD and Ecstasy are also Schedule I. The FDA classifies it as such because "marijuana has a high potential for abuse, has no currently accepted medical use in treatment in the United States, and has a lack of accepted safety for use under medical supervision" [source: FDA]. Medical marijuana advocates point to studies that dispute these claims and have filed numerous petitions asking for the FDA to reconsider marijuana's classification as a Schedule I drug.

The FDA's statement refers to evidence that smoking marijuana is harmful. The agency claims that medical evidence doesn't support marijuana as a viable treatment and that alternative treatments exist for most of the conditions that medical marijuana supposedly addresses. The FDA also says that state laws authorizing limited use of medical marijuana go against the stringent regulatory process mandated by the FDA, which is designed to ensure patient and consumer safety. Other federal entities, such as the DEA and Office of National Drug Control Policy, side with the FDA and don't support smoking marijuana for medicinal purposes.

The federal government did run a program from 1978 to 1992 that allowed select patients to receive medical marijuana. Only seven of the original patients are still alive and receiving marijuana through what was known as the IND Compassionate Access Program.

Now let's take a look at the practical side ­of medical marijuana, namely how patients receive it.

Don't Step on the Grass

One estimate says that marijuana may be the biggest cash crop in the United States, with a value in the billions [source: Samuels].