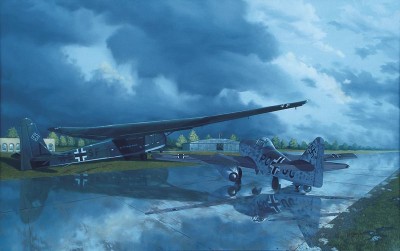 Development of the Messerschmitt Me 262 was a natural complement to Germany's success with the rocket research that resulted in the self-propelled V-1 and V-2 terror bombs.

The Messerschmitt Me 262 was clearly the best fighter plane of World War II, bristling with firepower and capable of flying 120 miles per hour faster than America's outstanding P-51 Mustang.

However, it is important to put a myth to rest about this classic airplane. The sleek Messerschmitt's late introduction into combat was not a result of Adolf Hitler's decision to make this jet aircraft a fighter-bomber rather than a pure fighter. The Messerschmitt Me 262 was delayed because the Junkers Jumo 004 jet engine that powered it did not reach quantity production until the spring of 1944. The real failure lies with the German Air Ministry, which did not recognize the potential of the jet engine and did not -- as it easily could have -- assign the priorities necessary to put reliable jet engines into production.

Had the Air Ministry done its job, the Messerschmitt Me 262 could have been in operation in great numbers by 1943, and the Allies would not have won the air superiority that made the June 6, 1944, D-day invasion possible. Without an invasion, Hitler might have connived a negotiated peace with Stalin, freeing up countless German troops for action on the Western Front. This in turn could have led to the atomic bomb being dropped on Berlin in 1945, rather than on Hiroshima.

The Messerschmitt Me 262's dramatic swept wings were mandated when engineers discovered that the weight of the engine pods threw off the plane's center of gravity; the wing sweep restored equilibrium.

Fortunately for the Allies, the delay in engine production delayed the Me 262's entrance into combat until the fall of 1944, by which time Germany no longer possessed the means to train pilots in the jet's use. Although some 1,433 Messerschmitt Me 262 fighters were delivered, only about 300 saw combat. There were probably never more than 36 in the air at a time when the Allies customarily put 1,000 bombers and 1,000 fighters over the ruins of Germany.

The great legacy of this classic airplane is that it inspired other air forces to adopt the jet fighter as standard, and moved engineers to utilize its layout -- swept wings and twin-pod engines -- for fighters and airliners.