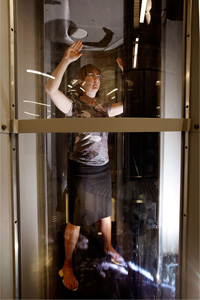 Assume the position, the airport security body scanning position that is. This volunteer stands inside a millimeter wave scanner at the TSA's Systems Integration Facility at Ronald Reagan National Airport on Dec. 30, 2009.
Chip Somodevilla/Getty Images

Now consider a wave that falls in a range exactly between 0.001 meters (1 millimeter) and 0.01 meters (10 millimeters). Scientists refer to the energy in this tiny sliver of the electromagnetic spectrum as millimeter wave radiation. Millimeter waves have a variety of uses but are especially important in radio broadcasting and cell phone transmissions. And, because the wavelengths of millimeter waves are large relative to natural and synthetic fibers, they tend to pass through most materials, such as clothing, making them an ideal candidate for scanning technologies.

Millimeter wave scanners produce their waves with a series of small, disc-like transmitters stacked on one another like vertebrae in a spine. A single machine contains two of these stacks, each surrounded by a curved protective shell known as a radome, connected by a bar that pivots around a central point. Each transmitter emits a pulse of energy, which travels as a wave to a person standing in the machine, passes through the person's clothes, reflects off the person's skin or concealed solid and liquid objects and then travels back, where the transmitter, now acting like a receiver, detects the signal. Because there are several transmitter/receiver discs stacked vertically and because these stacks rotate around the person, the device can form a complete picture, from head to toe and front to back.

It's the job of software in the scanner system to interpret the data and present an image to the TSA operator. The software creates a 3-D, black-and-white, whole-body silhouette of the subject. It also employs a feature known as automated target recognition, or ATR, which means it can detect threats and highlight them for easy identification. ATR technology is capable of detecting liquids, gels, plastics, powders, metals and ceramics, as well as standard and homemade explosives, drugs and money.

The ATR software also does something else. A scanner without this software forms images that reveal a person's unique topography, but in a way that looks like a crudely formed graphite prototype. In other words, you can see some physical features, but not with the same detail as Superman or backscatter scanners, both of which possess X-ray vision. A millimeter wave scanner with ATR software produces a generic outline of a person -- exactly the same for everyone -- highlighting any areas that may require additional screening.