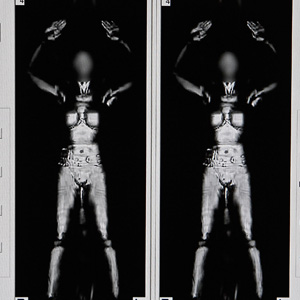 Compared to the generic body outline you just saw, this image produced with the introduction of mmw scanners in December 2009 provides a lot more detail.
Chip Somodevilla/Getty Images

As soon as the TSA began installing millimeter wave scanners, the public began asking questions, mostly related to privacy and safety. In the former category, people objected to the idea of strangers peering beneath their clothes to see intimate details or reveal evidence of mastectomies, colostomy appliances, penile implants and catheter tubes. A representative of the American Civil Liberties Union described whole-body imaging as "nothing more than an electronic strip search."

To quell the uproar, the TSA introduced several precautions on mmw scanners. One of those, as we've already discussed, involves installing automated target recognition software on a number of the machines. The software renders every subject as a generic outline, with suspicious areas highlighted. And if it doesn't detect anything suspicious in a scan, it displays the word "OK" with no image at all. For scanners without ATR software, the security operator viewing the resulting image sits at a remote location and communicates wirelessly with the agent operating the machine. And no machine is capable of storing images. Each image is deleted automatically as soon as the remote security officer completes his or her inspection. That said, what's a rule without an exception? The U.S. Marshals Service failed to delete thousands of images captured with a millimeter wave system at a courthouse in Florida. Yep, thousands [source: McCullagh].

Of course, none of these measures protects a passenger from harmful effects of the waves themselves. Luckily, several studies have determined that millimeter wave scanners pose little risk to passengers, pilots or the TSA agents who operate the machines. The waves produced by these scanners are much larger than X-rays and are of the non-ionizing variety. Ionizing radiation has enough energy to remove electrons from atoms, but radio waves, visible light and microwaves don't have this ability. As a result, they don't alter the structure of biological molecules, such as proteins and nucleic acids.

The bigger issue with millimeter wave scanners seems to be the high number of false alarms. They can get fooled by objects that come in sizes close to the wavelength of the energy. In other words, folds in clothing, buttons and even beads of sweat can confuse the machine and cause it to detect what it thinks is a suspicious object. When Germany tested mmw scanners, security officials there reported a false positive rate of 54 percent, meaning that every other person passing through the machine required a pat-down that found no weapon or concealed object [source: Grabell and Salewski]. Because of these disappointing results, France and Germany stopped using millimeter wave scanners, leaving them no good alternative to scan fliers.