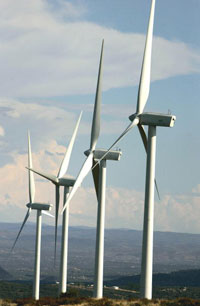 The moon's gravitational pull on water bodies creates tides. In turn, this movement creates kinetic energy that is carried by the water. Anything that moves has kinetic energy -- whether it's wind or a ball rolling down a hill. Kinetic energy can be captured by humans through windmills. Researchers are trying to tap into the power of the tides through a design similar to a windmill.

Underwater (or tidal) turbines are a fairly straightforward concept, as far as cutting-edge energy technology goes. They are essentially windmills installed onto an ocean floor or river bed. The underwater current produced by the tides spins blades arranged like an airplane propeller. These turbines are attached to a gear box, which is connected to an electrical generator. This produces the electricity that is carried by cable to shore. Once it's plugged into an electrical grid, the electricity can be distributed [source: New Scientist].

Although underwater turbines are essentially the same thing as windmills, they have a few advantages over their above-ground cousins. Windmills require land, especially wind farms -- assemblages of dozens or hundreds of windmills. The future of land use (how land is developed and what it's used for) is becoming a major topic of discussion. With 6 billion people on the planet and counting, space is at a premium

-- not just for housing, but for crop production and more. Underwater turbines overcome this problem.

Another advantage of underwater energy capture comes from water's high density. Water is denser than air, which means that the same amount of energy can be produced by an underwater turbine as a windmill, but at slower speeds and over less area. What's more, while the amount of wind that passes over any given area of land can be unpredictable, the kinetic energy of tidal areas is dependable. The ebb and flow is so predictable, a given tidal region can be expressed in the amount of kilowatt hours of electricity it can produce per turbine.

Scientists have been examining the amount of energy found in a tidal pool in monthlong periods. There are two main measurements. Mean spring peak velocity is the highest velocity of tidal movement that can be found in an area during a single month. Mean neap peak cycle is the lowest point in velocity that a tidal area experiences in a month [source: Carbon Trust]. These two measurements can help approximate the greatest and least amounts of velocity found in any given tidal pool over the course of a month.

Besides the tides, there are other characteristics that affect the velocity of water. The surrounding terrain -- for example, whether the area is rocky or sandy -- determines how water moves. Whether a tidal area is narrow or wide can also impact velocity. A narrow channel can concentrate water's movement, causing it to speed up.

Tidal movement and water bodies' characteristics can be taken into account on paper, but it's not until real-world tests are undertaken that actual understanding of the impact of tidal turbines can begin. On the next page, find out about some projects around the world that are helping researchers to better understand underwater turbine power production.