Diving in without testing the water? 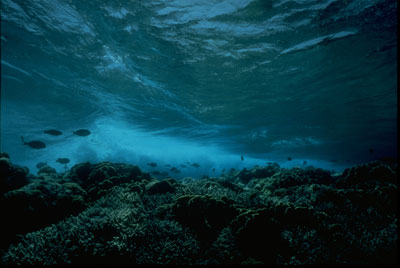 Small-scale projects are underway to reveal the real impact underwater turbines will have on the ecology of tidal areas.
Jeffrey L. Rotman/Time Life Pictures/Getty Images

Aquatic researchers have a pretty good handle on the movement of water in tidal areas, but some factors remain unknown. Some researchers fear that humans may push underwater turbine technology along quickly, without fully understanding the impact it can have [source: Roach]. What happens when vast numbers of underwater turbines are concentrated in tidal areas? While energy cannot be created or destroyed, it can be captured and transferred to other uses, like fulfilling our electrical needs. But remember that the kinetic energy captured in the ocean was serving the aquatic environment -- perhaps in ways we don't fully understand yet.

There's little data concerning the impact underwater turbines can have on marine ecosystems. A rapidly spinning blade could easily turn a little fishie into chum with a single swipe. Fish lovers will be happy to learn that, at present, underwater turbines spin slowly -- one set turns at 10 to 20 rotations per minute (rpm) [source: New Scientist]. Turbines that move a couple feet per second don't pose much of threat to fish. But what about next-generation turbines that may rotate at a faster rate?

The lack of understanding of the turbines' environmental impact goes both ways, too. Questions remain as to what kind of effect the aquatic environment will have on the technology. For example, will barnacles accumulate on the turbines or rotors, slowing or even stopping them?

To answer these questions, underwater turbine pilot projects have been created throughout the world. The first to produce electricity is found on the bottom of the Kvalsund Channel in Norway. This turbine features 33-foot-long blades that spin at a rate of 7 rpm and stands nearly 66 feet tall at its highest point beneath the water's surface. In September 2003, the turbine's generator was connected to the electrical grid of Hammerfest, a local village. The single turbine produces 700,000 kilowatt hours annually -- which provides power to an average of 35 homes in the area [source: Roach].

Another group is evaluating the impact of turbines on aquatic life. Verdant Power deployed five 35-kilowatt turbines with equipment to monitor the surrounding aquatic life. Fish are detected and tracked within 54 feet (18 meters) of the equipment and the data is recorded. So far, no fish has been struck by the turbines [source: Verdant].

Verdant is also involved in a project in New York's East River. Six 35-kilowatt tidal turbines were installed in a channel with currents that flow at a rate of up to 4 knots (about 4.6 miles per hour). The six turbines currently produce electricity that powers a grocery store and parking garage nearby. Verdant is planning to add more turbines to the channel, which should produce enough electricity to power 4,000 homes [source: Popular Mechanics].

The United Kingdom is also studying the potential for underwater turbine electricity production. The U.K. company Marine Current Turbines has planted a pair of turbines attached to a single pile, driven into the floor of the North Sea off the coast of Ireland. The turbines are massive; each blade is 60 feet long. As they spin, the turbines produce 1.2 megawatts of electricity [source: New Scientist].

For more information on energy and other related topics, visit the next page.