What's on the surface of the moon? 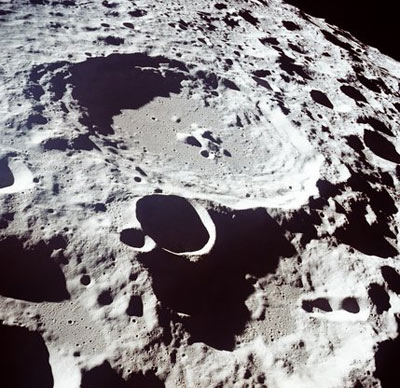 As we mentioned, the first thing that you'll notice when you look at the moon's surface are the dark and light areas. The dark areas are called maria. There are several prominent maria.

The maria cover only 15 percent of the lunar surface.

The remainder of the lunar surface consists of the bright highlands, or terrae. Highlands are rough, mountainous, heavily cratered regions. The Apollo astronauts observed that the highlands are generally about 4 to 5 km (2.5 to 3 miles) above the average lunar surface elevation, while the maria are low-lying plains about 2 to 3 km (1.2 to 1.8 miles) below average elevation. These results were confirmed in the 1990s, when the orbiting Clementine probe extensively mapped the lunar surface.

The moon is littered with craters, which are formed when meteors hit its surface. They may have central peaks and terraced walls, and material from the impact (ejecta) can be thrown from the crater, forming rays that emanate from it. Craters come in many sizes, and you'll see that the highlands are more densely cratered than the maria.

Besides craters, geologists have noticed cinder cone volcanoes, rilles (channel-like depressions, probably from lava), lava tubes and old lava flows, which indicate that the moon was volcanically active at some point.

The moon has no true soil because it has no living matter in it. Instead, the "soil" is called regolith. Astronauts noted that the regolith was a fine powder of rock fragments and volcanic glass particles interspersed with larger rocks.

Upon examining the rocks brought back from the lunar surface, geologists found the following characteristics:

Astronauts placed other scientific packages on the moon to collect data:

Let's look at what all of this information tells us about the formation of the moon.

Think you know all there is to know about the moon? Test your knowledge with our Moon Quiz.