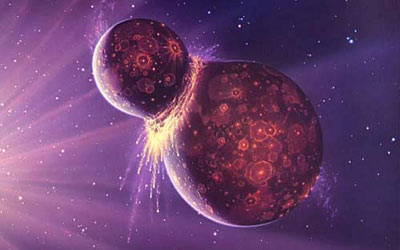 According to the Giant Impact hypothesis, about 4.45 billion years ago a Mars-size body slammed into the young Earth. It melted and merged into the core of the Earth, and the resulting debris coalesced to form the moon.
Image courtesy NASA

At the time of Project Apollo in the 1960s, there were basically three hypotheses about how the moon formed.

But based on the findings of Apollo and some scientific reasoning, none of these hypothesis worked very well.

Because none of these hypotheses was satisfactory, scientists looked for another explanation.

In the mid-1970s, scientists proposed a new idea called the Giant Impactor (or Ejected Ring) hypothesis. According to this hypothesis, about 4.45 billion years ago, while t­he Earth was still forming, a large object (about the size of Mars) hit the Earth at an angle. The impact threw debris into space from the Earth's mantle region and overlying crust. The impactor itself melted and merged with the Earth's interior, and the hot debris coalesced to form the moon.

The Giant Impactor hypothesis explains why the moon rocks have a composition similar to the Earth's mantle, why the moon has no iron core (because the iron in the Earth's core and impactor's core remained on Earth), and why moon rocks seem to have been baked and have no volatile compounds. Computer simulations have shown that this hypothesis is feasible.

Lunar day: 29.5 Earth days (the moon is tidally locked to the Earth, so our gravity drags the moon around on its axis and the same side of the moon always faces Earth)