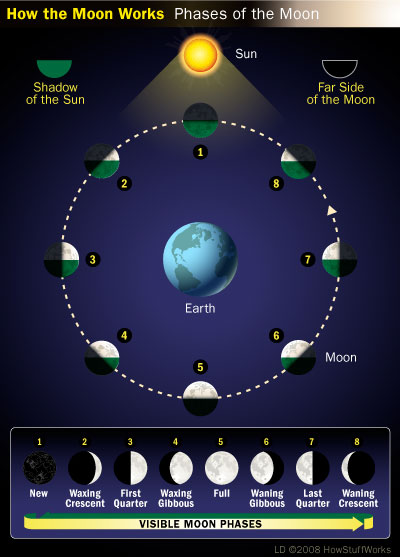 Every night, the moon shows a different face in the night sky. On some nights we can see its entire face, sometimes it's partial, and on others it isn't visible at all. These phases of the moon aren't random -- they change throughout the month in a regular and predictable way.

As the moon travels in its 29-day orbit, its position changes daily. Sometimes it's between the Earth and the sun and sometimes it's behind us. So a different section of the moon's face is lit up by the sun, causing it to show different phases.

Over the billions of years of the moon's existence, it has moved farther away from the E­arth, and its rate of rotation has also slowed. The moon is tidally locked with the Earth, which means that the Earth's gravity "drags" the moon to rotate on its axis. This is why the moon rotates only once per month and why the same side of the moon always faces the Earth.

Every day, the Earth experiences tides, or changes in the level of its oceans. They're caused by the pull of the moon's gravity. There are two high tides and two low tides every day, each lasting about six hours.

The moon's gravitational force pulls on water in the oceans and stretches the water out to form tidal bulges in the ocean on the sides of the planet that are in line with the moon. The moon pulls water on the side nearest it, which causes a bulge toward the moon. The moon pulls on the Earth slightly, which drags the Earth away from the water on the opposite side, making another tidal bulge there. So, the areas of the Earth under the bulge experience high tide, while the areas on the thin sides have low tide. As the Earth rotates underneath the elongated bulges, this creates high and low tides about 12 hours apart.

The moon also stabilizes the Earth's rotation. As the Earth spins on its axis, it wobbles. The moon's gravitational effect limits the wobble to a small degree. If we had no moon, the Earth might move almost 90 degrees off its axis, with the same motion that a spinning top has as it slows down.

As the Earth spins on its axis, it wobbles like a top, and the axis slowly moves in the direction that it points. This movement (which is called precession) has occurred slowly over a period of 26,000 years, and it has caused the position of the Earth's pole star to change. Polaris is the current North Star, but in 3000 B.C., it was Thuban, in the constellation Draco. In A.D. 14,000, Vega in the constellation Lyra will be the pole star.