Mustard Gas After World War I 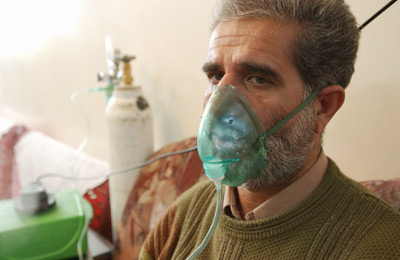 Iranian chemical weapon victim exposed to Iraqi mustard gas during the Iran-Iraq war, breathes through a respirator. Tens of thousands of Iranians were exposed to Iraqi gas attacks.
Getty Images

Mustard gas has seen action in other parts of the world since its introduction in World War I. The Japanese used mustard gas against the Chinese during World War II, while the United Nations accused Saddam Hussein of using the deadly gas against the city of Halabja in 1988 during the Iran-Iraq war to kill approximately 3,200 to 5,000 civilians [source: Blister Agent HD, The Nation]

At the end of the Gulf War, the U.N. imposed strict sanctions against Iraq in order to eliminate the risk of future chemical warfare. In addition, the U.N. adopted the Chemical Weapons Convention, a global treaty that prohibits the use of chemical weapons. The only countries that hadn't signed the treaty as of 2007 were Angola, Egypt, Lebanon, North Korea, Somalia, Syria and Iraq [source: Encyclopaedia Britannica]. As long as chemical weapons exist, they will forever be a threat. We can only hope they don't fall into the wrong hands.

For more information on chemical agents and warfare, visit the links below.

Rules of Engagement or Rules to be Broken?

The first Geneva Convention in 1864 was drafted to protect the sick and wounded during wartime and establish a set of rules during war. If anything positive came out of chemical warfare, it came in the drafting of the Geneva Protocol in 1925. The protocol banned the use of poisonous gas and biological weapons in war, but it didn't say anything about making or stockpiling them, which the U.S. did during World War II. The Japanese, Polish and German armies took it farther and actually used mustard gas during that war. The U.S. would again break with the spirit of the agreement during the Vietnam War, developing and using Agent Orange. Over the years, the U.N. has struggled to enforce certain aspects of the Geneva Conventions and the Geneva Accords.