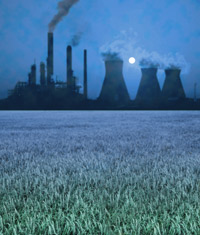 Power plants must limit emissions of SO and NOx to meet targets set by the Acid Rain Program.
Photographer: Czbrat | Agency: Dreamstime.com 2

Acid rain has existed since the first factories of the Industrial Revolution began spitting out toxic emissions. An English scientist, Robert Angus Smith, coined the term "acid rain" in 1872 when he wrote of its corroding touch on buildings and deadly effect on plants. But acid rain did not become a government-monitored environmental problem until more than a century later. Scientists had by then determined that acid rain was a transboundary rather than a local concern. In 1980, the Acid Deposition Act launched a 10-year study on acid rain under the direction of the National Acidic Precipitation Assessment Program (NAPAP) to monitor sites around the country.

In 1990, armed with the NAPAP's study, Congress changed the existing Clean Air Act to include acid rain. The new Title IV amendment of the Clean Air Act called for SO2 and NOx reductions. The Acid Rain Program (ARP) was formed in 1995 to bring Title IV into effect.

The ARP places limits on the power industry to reduce annual emissions of SO2 and NOx. The ARP uses a cap and trade program to cut SO2 emissions. It sets a cap on the total amount of SO2 that power plants in the contiguous United States can produce. After setting a cap, the ARP distributes allowances to power plant units. Units are only allowed to produce as much SO2 as they have credit for. If they reduce emissions faster than the ARP requires, they can bank allowances for future use or sell them to other plants. The final 2010 cap will be 8.95 million tons allowed per year, a remarkable 50 percent less than power plant emissions from 1980 [Source: EPA].

The ARP regulates NOx reductions with a more conventional rate-based regulatory system. The program sets a limit on allowable pounds of NOx per million British thermal units (lb/mmBtu) for every power plant's boiler. Owners either meet target reductions for individual boilers or average the emissions of all units owned and meet a combined target. The ARP aims to reduce NOx to 2 million tons below the projected 2000 level had Title IV not existed [Source: EPA].

Even with an increased energy demand, the ARP has successfully reduced emissions of SO2 and NOx. But NAPAP suggests that for ecosystems to fully recover, reductions will have to drop an additional 40 percent to 80 percent below the full-force limits of 2010 [Source: EPA].

Cars also emit NOx. Newer designs of catalytic converters help treat exhaust and remove NOx and other pollutants like carbon monoxide and the VOCs that contribute to smog.

Even with remarkable clean coal technologies, catalytic converters and strong caps and regulations, fossil fuels are still a dirty power source. Alternative forms of energy like nuclear, solar and hydropower do not emit the millions of tons of SO2 and NOx­ that upend ecosystems, blight buildings and monuments and weaken people's health.

­To learn more about acid rain, alternative forms of energy and other related topics, check out the links below.