What is St. Elmo's Fire? 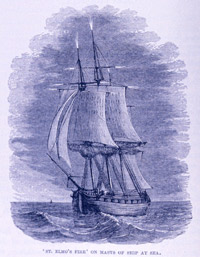 St. Elmo's torchlike flames shoot off the mast of a ship at sea.
Dr. G. Hartwig/Treasures of the NOAA Library Collection/ National Oceanic and Atmospheric Administration/Department of Commerce

­If you were to look outside your home during a thu­nderstorm and see a tall streetlamp glowing with­ blue flames, you might be tempted to call the fire department. Then you might notice that the streetlamp is on fire but isn't actually burning -- and the water from the fire hose isn't putting out the flames. At this point, you might be about ready to call a priest, but that, like the call to the fire department, would be unnecessary. The phenomenon you're witnessing is actually St. Elmo's Fire. (Which has nothing to do with a 1980s coming-of-age film starring a young Emilio Estevez.)

St. Elmo's Fire is a weather phenomenon involving a gap in electrical charge. It's like lightning, but not quite. And while it has been mistaken for ball lightning, it's not that, either -- and it's definitely not fire.

Early observers of the phenomenon, mostly sailors on high seas during thunderstorms, seem to have understood they weren't looking at actual fire, because instead of abandoning ship, they took comfort in the sudden glow atop the masts. Such famous figures as Magellan, Caesar and Columbus experienced St. Elmo's Fire on their journeys. And Pliny the Elder, who seems to have documented absolutely every natural phenomenon back in the 1st century A.D., beat everyone else to the punch when he described blue flames appearing out of nowhere during thunderstorms.

Sailors tended to attribute the glow to "St. Elmo," a mispronunciation of St. Ermo or St. Erasmus, the patron saint of Mediterranean sailors. They believed the fire was a sign of salvation from the saint, since the phenomenon occurs most often toward the end of a storm. Benjamin Franklin and Charles Darwin viewed the weather event through a decidedly more scientific perspective. But regardless of interpretation, it's clear they were all observing the same phenomenon. And contrary to popular belief, St. Elmo's Fire doesn't only occur at sea.

Causes of St. Elmo's Fire: The Fire That's Not a Fire 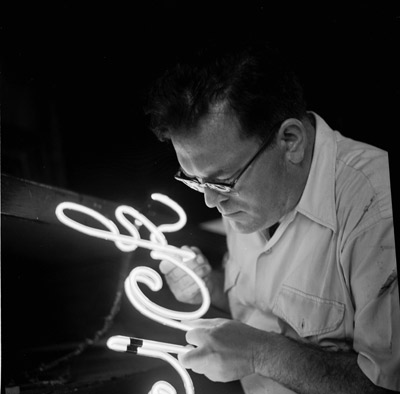 Like lightning, St. Elmo's Fire is plasma, or ionized air that emits a glow. But while lightening is the movement of electricity from a charged cloud to the ground, St. Elmo's Fire is simply sparking, something like a shot of electrons into the air. It's a corona discharge, and it occurs when there is a significant imbalance in electrical charge, causing molecules to tear apart, sometimes resulting in a slight hissing sound.

The first step in generating St. Elmo's Fire is a thunderstorm. As you can learn in How Lightning Works, a thunderstorm creates an electrically charged atmosphere. There is a charge difference between the storm clouds and the ground, and this difference creates voltage, or electrical pressure. In between the clouds and the ground, the atoms in the air undergo changes; most important to our discussion, electrons move farther away from protons, creating an environment that allows electrons to move around freely. In other words, the air becomes a good conductor.

Once the air is conducive to the movement of electrons, those electrons continue to increase the distance between their positively charged counterpart, protons. This is ionization, and plasma is simply ionized air. The phenomenon that causes St. Elmo's Fire is a dramatic difference in charge between the air and a charged object, like the mast of a ship, the tip of an airplane wing or the 30-foot steeple of a church -- things we often think of as potential lightning rods.

When the voltage gets high enough, usually around 30,000 volts per centimeter of space, the charged object will discharge its electrical energy [source: Scientific American]. The reason why St. Elmo's Fire occurs most often on pointed objects is that a tapered surface will discharge at a lower voltage level. The tip of a steeple, mast or airplane wing presents something like a condensed surface charge.

When the air molecules tear apart, they emit light. In the case of St. Elmo's Fire, the discharge is continuous -- sometimes lasting several minutes -- and creates a constant glow. The glow is blue because different gasses glow different colors when they become plasmas. Earth's atmosphere has nitrogen and oxygen in it, and this particular combination happens to glow blue.

St. Elmo's Fire is exactly what's happening in neon tubes -- essentially a continuous spark. If Earth's atmosphere were made up of neon, St. Elmo's Fire would glow orange instead of blue. A neon tube is simply St. Elmo's Fire contained in glass. St. Elmo's Fire also behaves something like a plasma globe. One pilot described the phenomenon occurring on the windshield of her small plane while flying through a storm cloud; when she touched the inside of the windshield, blue streaks reached toward the tips of her fingers [source: USA Today].

For more information on St. Elmo's Fire and related topics, look over the links on the next page.